'We have succeeded in combining nanowires grown by the VLS (vapor-liquid-solid) and SAE (selective-area epitaxy) techniques onto the same platform. The difference compared with studies conducted previously on the same topic is that in the dual-type array the different materials do not grow in the same nanowire, but rather as separate wires on the same substrate', says Docent Teppo Huhtio.

The research results were published in the Nano Letters journal on 5 February 2015.

The new fabrication process has many phases. First, gold nanoparticles are spread on a substrate. Next, the substrate is coated with silicon oxide, into which small holes are then patterned using electron beam lithography. In the first step of growth, (SAE), nanowires grow from where the holes are located, after which the silicon oxide is removed. In the second phase different types of nanowires are grown with the help of the gold nanoparticles (VLS). The researchers used metalorganic vapor phase epitaxy reactor in which the starting materials decompose at a high temperature, forming semiconductor compounds on the substrate.

'In this way we managed to combine two growth methods into the same process', says doctoral candidate Joona-Pekko Kakko.

'We noticed in optical reflection measurements that light couples better to this kind of combination structure. For instance, a solar cell has less reflection and better absorption of light', Huhtio adds.

Nanowires are being intensely researched, because semiconductor components that are currently in use need to be made smaller and more cost-effective. The nanowires made out of semiconductor materials are typically 1-10 micrometres in length, with diameters of 5-100 nanometres.

Pictures can be downloaded http://materialbank.aalto.fi:80/public/bbff43bfc854.aspx

Nanowires produced by Aalto University, Finland researchers have also been studied at the Tampere University of Technology, Finland. The research has involved the development of optical measurement techniques making it possible to get more information about the characteristics of nanowires. The results that have been attained have broader significance for the study of non-linear optical phenomena in nanostructures. The findings were published in the journal Nano Letters on 4 February 2015. 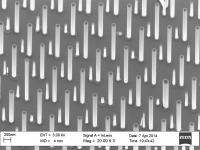