Assistant Professor Ohmura Shu and Professor Takahashi Akira of the Nagoya Institute of Technology and others have developed a charge model to describe photoexcited states of one-dimensional Mott insulators*1) under the JST Strategic Basic Research Programs. They have also succeeded in constructing a many-body Wannier function*2) as the localized basis state of the photoexcited states and calculating large-system, optical conductivity spectra that can be compared with experimental results.

There has been growing interest in recent years in how the electronic state of a strongly correlated electron system*3) changes on ultrafast time-scales through electric field application or photoirradiation. For example, experiments demonstrate that when a Mott insulator is excited with a strong light, holon and doublon*4) are created and metallize swiftly. To understand this physical mechanism, it is necessary to conduct a theoretical calculation of the wave function of the system. The electronic state of a strongly correlated electron system can be described with an extended Hubbard model*5). However, given the capacity of existing computers, it was not possible to calculate the wave function for a large system that can be compared with experimental results or to use it to obtain the light spectrum even for one-dimensional systems with the simplest of electronic states.

Therefore, a charge model has been developed under the one-dimensional extended Hubbard model that can be used to accurately handle charge fluctuation*6) in addition to the spin-charge separation*7) characteristics of one-dimensional Mott insulators. By comparing the precisely calculated optical conductivity spectra of the extended Hubbard model and the charge model, it was demonstrated that charge fluctuation is essential to the description of the photoexcited states and that the charge model is effective. Moreover, a many-body Wannier function that integrated the effects of electron-electron interactions by applying information science methods to the charge model was constructed, resulting in the successful acquisition of optical conductivity spectra for systems consisting of more than 100 atoms or molecules that could be directly compared with experimental results.

*1) Mott insulator
According to band theory, a system turns into metal when the valence band is incompletely filled. However, one type of strongly correlated electron systems, the Mott insulator, becomes an insulator as electrons are localized at the sites (atoms or molecules) due to strong Coulomb repulsion between the electrons.

*3) Strongly correlated electron system
The collective term for a substance group where the electrons are subject to strong Coulomb interaction. The effect of the electron-electron interaction has a fundamental effect, generating a wide variety of interesting physical properties including metal-insulator transition.

*4) Holon and doublon
The subject of this research is the Mott insulator with one electron at each site. In this system, a site without an electron has a positive charge and a doubly occupied site has a negative charge. The former is called holon and the latter doublon. When a Mott insulator is irradiated with light, they are created in pairs. This state is called a holon-doublon pair.

*6) Charge fluctuation
As an approximation, there is no excitation of a charge during the ground state of a Mott insulator, while just one holon-doublon pair is excited when one photon is absorbed. However, as a matter of quantum mechanics, it is necessary to express the system as a composite of the states in which a wide variety of holon-doublon pairs is excited. This corresponds to the existence of charge fluctuation. The effect of charge fluctuation always exists except in the case where onsite Coulomb energy is extremely large. 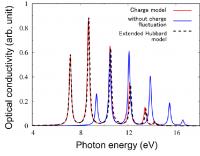