CHAMPAIGN, Ill. — Researchers report that a single-stranded DNA-binding protein (SSB), once thought to be a static player among the many molecules that interact with DNA, actually moves back and forth along single-stranded DNA, gradually allowing other proteins to repair, recombine or replicate the strands.

Their study, of SSB in the bacterium Escherichia coli, appears today in the journal Nature.

Whenever the double helix of DNA unravels, exposing each strand to the harsh environment of the cell, SSB is usually first on the scene, said University of Illinois physics professor and Howard Hughes Medical Institute investigator Taekjip Ha, who led the study.

Although DNA unwinding is necessary for replication or recombination, it is normally a transient process, he said. Exposed single-stranded DNA (ssDNA) can be damaged or degraded by enzymes in the cell. Damaged DNA may also come unwound, and ssDNA can bond to itself, forming hairpin loops and other problematic structures.

"If you have lots of single-stranded DNA in the cell, basically it's a sign of trouble," Ha said. "SSB needs to come and bind to it to protect it from degradation and to control what kind of proteins have access to the single-stranded DNA."

Although other proteins are known to travel along double-stranded DNA, this is the first study to find a protein that migrates back and forth randomly on single-stranded DNA, Ha said.

Other researchers had assumed that SSB simply bound to DNA where it was needed and then fell off when its job was done. But a collaborator on the new study who has studied SSB for two decades, Timothy Lohman, of Washington University School of Medicine, suspected that the protein's interaction with DNA was more dynamic. That hunch turned out to be true, Ha said.

The SSB protein is made up of four identical subunits. Single-stranded DNA loops around and through them in a pattern "that looks like the seam on a baseball," Ha said. The DNA entry and exit points are very close to one another, making it possible to track the interaction of ssDNA and SSB using a technique called fluorescence resonance energy transfer (FRET).

FRET makes use of fluorescent molecules whose signals vary in intensity depending on their proximity to one another. By labeling different lengths of ssDNA with red and green dyes about 65 nucleotides apart (the length of ssDNA that threads through the SSB) and tracking the FRET signal as these single DNA molecules were exposed to SSB, the researchers were able to track the movement of SSB in relation to the single-stranded DNA.

In a series of experiments, the researchers showed that SSB diffuses randomly back and forth along single-stranded DNA, and that this movement is independent of the sequence of nucleotides that make up the DNA. They also found that an important DNA repair protein in E. coli, RecA, grows along the ssDNA in tandem with the movement of SSB. As the RecA protein extends along the DNA strand it prevents the backward movement of the SSB.

The researchers also found that SSB can "melt" small hairpin loops that appear in single-stranded DNA, straightening them so that the RecA protein can bind to and repair them. In this way SSB modulates the activity of RecA and other proteins that are involved in DNA repair, recombination and replication.

"SSB may be a master coordinator of all these important processes," Ha said.

This research was supported by the National Science Foundation, the Howard Hughes Medical Institute and the National Institutes of Health. The study is a project of the NSF-funded Center for the Physics of Living Cells at the University of Illinois, which Ha co-directs with U. of I. physics professor Klaus Schulten. Ha also is an affiliate of the Institute for Genomic Biology. 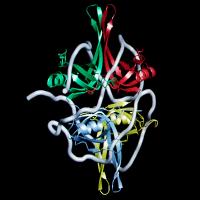 The Structure of SSB