When it comes to supreme governance, even ancient Maya rulers knew there was no substitute for a good political adviser – and allegiance wasn't guaranteed.

New research from the University of Cincinnati has shown how these holy lords of Maya city-states, predominantly thought of as lone monarchs responsible for all decision making, often relied on support from royal courtiers – and increasingly so as their society began to crumble. Assistant professor of anthropology Sarah E. Jackson discusses her findings in her first book, "Politics of the Maya Court: Hierarchy and Change in the Late Classic Period," published in May by the University of Oklahoma Press. Jackson's book identifies these court positions, and her research is the first to discuss them as formalized offices and portray some of the individuals who held them.

"For a long time in Maya studies there's been an emphasis on a singular ruler, this k'uhul ajaw, or holy lord. They were seen as this axis mundi, so they have both political and religious power," Jackson says. "Looking at the Late Classic period (600-900 A.D.) it becomes clear that we still have the k'uhul ajaw but there are many other people who are implicated in governance."

More than a millennium ago in what is now southern Mexico and Central America, Maya civilization began creeping toward ruin. What spurred this collapse remains a mystery to modern scholars. But through her research Jackson reveals that the Maya lords felt those first tremors of cultural uncertainty and looked not only to the heavens for help but also to their royal court. The Maya kings – believed to be a direct conduit to the gods by Maya commoners – held on to their ultimate authority, but they began to adapt their system of government by building up the courtly elite.

By deciphering hieroglyphics and iconography etched into stone monuments and painted on ceramic objects, Jackson has been able to provide previously unknown detail on the political hierarchy of Maya government, specifically as it relates to the rise of the royal court across the final centuries of the Maya empire. She found the courts were comprised of various combinations of five distinct positions: sajal, ajk'uhuun, ti'huun/ti'sakhuun (two variants of one title), yajaw k'ahk' and "banded bird" (a nickname representing this undeciphered glyph).

Jackson gathered all textual references to these positions and tracked temporal, spatial and contextual data as well. Her research shows that Maya government was adapting by becoming more flexible. Courts were made of varying combinations of the five positions, and only one polity's court contained all five. Further, each position on the court appeared to be malleable, as duties were adapted to fit each community's needs in a culturally logical way.

Evidence suggests this political shift wasn't cosmetic. As Maya government became more fluid, the importance of the court as an institution solidified. The courts were found in many of the polities across the Maya landscape. What's more, there was legitimate power sharing taking place. Jackson found that the courtiers were required to undergo rites of passage very similar to ones required of the holy lord, supporting the notion that these titles weren't just honorific – they were empowered and important government entities.

"In the best-case scenario this is a great, flexible institution. It lets these polities respond to different circumstances, such as appeasing a surplus of elites through power sharing, supporting a ruler whose power is crumbling or other challenges that need the attention of multiple people," Jackson says. "What's intriguing is when we see moments where there's something funny going on."

Politics Can Be Messy

With politics – even for the Maya – there's often plenty of funny business. Jackson has been able to follow the political paths of specific court members, and she's seen how these politicians weren't necessarily in the ruler's pocket. For example, textual evidence shows that court members' terms of office could exceed that of the ruler himself, proof of the courtiers' autonomy. Some court members were so independent, they continued to express their allegiance to a former ruler even after joining the court of a new one. Jackson knows of a specific court member who took his independence to an extreme, eschewing loyalty to his ruler in favor of aligning with a particular deity.

Then there's the peculiar case of the 10-year interregnum at Yaxchilan. Not all transitions between city-state rulers went without a hitch, but none seemed to have dragged on as long as the change of office that left Yaxchilan without a ruler for a decade. It appears that some members of the royal court endured, perhaps easing the succession of power. Jackson points out thematic parallels between the Yaxchilan transition and a papal conclave, which often lasts a matter of days or weeks.

"You need to replace this hugely powerful person in terms of everyday things and who is also symbolically important. And the period of the conclave is very fraught. What if the conclave went on for 10 years?" Jackson says. "That underlines how these Maya courtiers would have been propping up these sites at really fraught moments. And many do weather the transition between rulers, suggesting that was a useful, maybe integral, role that they were playing."

Jackson hopes her book teaches readers how ancient and modern politics can be both strikingly similar and vastly different, and inspires readers to re-evaluate their understanding of government itself.

"I want readers to be surprised and intrigued by the complexities of how people organized themselves in places and times that are distant from us," Jackson says. "There are ideas about differentiation or organization or dealing with political struggle that might really resonate and that people might see around them in the news. And yet there are things we see that are wildly different and that push our ideas or our assumptions about how government works." 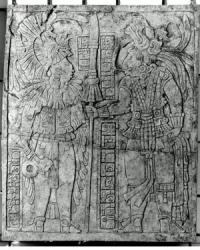 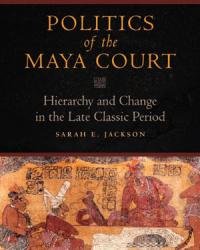