WARNING: Never look directly at the Sun! Read the RAS leaflet for guidance on how to view the eclipse safely.

If the weather is good, viewers across the UK will be treated to a partial solar eclipse on 21 August 2017, just before sunset. In a partial eclipse, a small bite out of the Sun can be seen at the mid-eclipse point, as it is covered by the Moon. A partial solar eclipse is a fascinating natural phenomenon, but is not of any practical scientific use, unlike a total eclipse which provides a special opportunity for studying the solar corona - the tenuous layers of hot gas around the Sun which are much fainter than the familiar yellow disk.

The duration of the eclipse will be approximately 40 minutes, with the midpoint occurring at various times across the country. Viewers in Edinburgh can expect the peak of the eclipse at 19:58 BST whereas for those in Cardiff the peak will occur at 20:05 BST.

Viewers in the USA will be treated to a more dramatic 'total solar eclipse', where the entire disk of the Sun is blocked by the Moon and the sky will go temporarily dark. Fourteen states will be able to experience the eclipse, lasting for more than 2 minutes, along a path stretching from the east to the west coast.

Eclipses of the Sun occur when the Moon passes directly between the Earth and the Sun, so they take place only at New Moon. Because of the way the Moon moves around the Earth and the Earth around the Sun, solar eclipses do not happen every month. There are between two and five every year, but each one is visible only in the limited band across the Earth's surface where the Moon's shadow happens to fall - which is different every time. At any particular place on Earth, solar eclipses are not so frequent.

Extreme care must be taken when observing the eclipse, because of the blinding brilliance of the Sun. Never, ever look directly at the Sun through binoculars or a telescope, for you will risk permanent eye damage. Even staring at the Sun is dangerous, and sunglasses are no protection. Hospitals regularly see patients who have damaged their eyes while watching eclipses. Don't be among them!

For more information on total and partial solar eclipses, and instructions on how to observe an eclipse safely, see the RAS leaflet.

Partial eclipse of the sun visible across UK 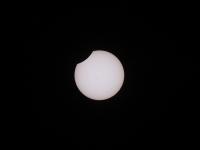 Image of the Partially Eclipsed Sun