Researchers from the group of Hans Clevers identified and characterized rare cell types in the upper gastrointestinal tract. Using single cell RNA sequencing, they studied the cellular composition of the esophagus, stomach and upper part of the small intestine. They provide detailed gene expression analyses for all epithelial cells in these organs. Furthermore, they identified a rare cell type that is most likely responsible for the secretion of high volumes of water in humans. This cell type provides a link to gastrointestinal defects in patients with cystic fibrosis. The paper was published in Cell Reports on the 9th of March and serves as a resource for other scientists in the field.

Every cell in the human body possesses all the genetic information - the DNA - of that person. However, cells only actively read the part of the DNA that they need to execute their functions; which part that is depends on the type of cell. The relevant genes are transcribed into RNA, which serves as the blueprint for the production of proteins. With a technique called single cell RNA sequencing (scRNA-seq), researchers can study the presence and quantity of RNA in individual cells and thereby obtain insight into the gene expression profiles of those cells.

In the new publication in Cell Reports, the researchers from the Clevers' lab describe how they used scRNA-seq to investigate the gene expression profiles of different cell types along the epithelium - a thin, protective layer of cells - of the upper gastrointestinal tract. This tract includes the esophagus, stomach and upper part of the small intestine. To this end, they obtained biopsies from healthy human tissue and compared the obtained data to mouse datasets. Although the main aim of the paper was to characterize and describe the different cell types in these organs, the researchers also obtained several interesting findings.

They found an esophageal stem cell population with high expression of the COL17A1 gene. Although mutations in this gene are known to lead to the development of blistering disease in the skin, defects associated with the esophagus are hardly reported in these patients. Additionally, the researchers characterized the cell composition in the stomach and found that the cells responsible for histamine production also express the Luteinizing Hormone (LH). This hormone is best known for its role in ovulation during the female reproductive cycle and for regulating testosterone levels in men. Why these cells in the stomach produce LH is unknown and requires further research.

When studying the upper part of the small intestine, the researchers found a rare cell type with high expression of 4 genes, which are all linked to the secretion of high volumes of water. The most prominent member is the CFTR gene. Mutations in CFTR cause cystic fibrosis (CF), which is a disease that mainly manifests in the lungs. However, patients with CF also experience problems associated with gastrointestinal obstruction. This is caused by a sticky, underhydrated mucus layer, which is most likely associated with the expression of the CFTR gene in the small intestine.

Comparing human and mouse datasets for the gastrointestinal organs revealed differences in gene expression patterns between humans and mice. For example, the cells in the stomach producing LH were only seen in humans and the cell type secreting high volumes of water does not exist in mice. Overall, these differences were more extensive than initially expected. That complicates the translation of results obtained in mice to humans, and other methods need to be used to validate human-specific findings. "We could for example use organoids to follow-up on our current findings," says Georg Busslinger, first author on the paper.

Although the results described in the paper thus need functional confirmation, they bring the field a step closer towards knowing the exact cell composition in the gastrointestinal tract and what these cell types might do. "The results provide insight into the molecular characteristics of individual cell types and how they may function in the healthy epithelium. Moreover, these data serve as a resource for scientists everywhere," Busslinger concludes.

Hans Clevers is group leader at the Hubrecht Institute and the Princess Máxima Center for Pediatric Oncology, professor of Molecular Genetics at Utrecht University, and Oncode Investigator. 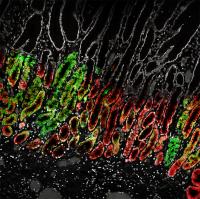 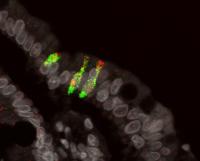