Specimens kept in the collection of the Institute of Beneficial Insects at the Fujian Agriculture and Forestry University (FAFU, China) revealed the existence of two previously unknown species of endoparasitoid wasps. Originally collected in 2013, the insects are known to inhabit prairies and bushes at above 3,400 m, which is quite an unusual altitude for this group of wasps.

The new to science wasps are described and illustrated in a paper published in the open-access, peer-reviewed scholarly journal ZooKeys by the team of Dr Wangzhen Zhang (FAFU and Fuzhou Airport Inspection and Quarantine Bureau) and his colleagues at FAFU: Dr Dongbao Song and Prof Jiahua Chen.

Looking very similar to each other, the species were found to belong to one and the same genus (Microplitis), which, however, is clearly distinct from any other within the subfamily, called Microgastrinae. The latter group comprises tiny, mostly black or brown wasps that develop in the larvae of specific moths or butterflies. Interestingly, once parasitised, the host continues living and does not even terminate its own growth. It is only killed when the wasp eggs hatch and feed on its organs and body fluids before spinning cocoons.

From now on, the newly described wasps will be called by the scientific names Microplitis paizhensis and Microplitis bomiensis, where their species names refer to the localities from where they were originally collected: Paizhen town and Bomi county, respectively.

Due to their parasitism, some microgastrine wasps are considered important pest biocontrol agents. Unfortunately, the hosts of the newly described species remain unknown.

In addition, the scientists also mention a third new to science species spotted amongst the specimens they studied. However, so far they have only found its male, whereas a reliable description of a new microgastrine wasp requires the presence of a female.

Two new species of parasitic wasps described from an altitude of over 3,400 m in Tibet 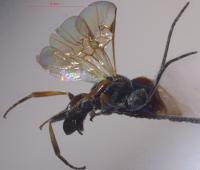