Even under the most optimistic scenarios, most of the coral reef ecosystems on our planet - whether in Australia, the Maldives or the Caribbean - will have disappeared or be in very bad shape by the end of this century. That's because global warming is pushing ocean temperatures above the limit that single-cell algae, which are corals' main allies, can withstand. These algae live inside coral tissue for protection and, in exchange, provide corals with essential nutrients produced through photosynthesis. Because the algae contain a variety of pigments and therefore give coral reefs their famous colors, if they are lost the corals turn white, which is known as coral bleaching. But in spite of the real threat caused by global warming, corals in the Red Sea look set to keep their vibrant color.

"We already knew that corals in the Gulf of Aqaba, at the northern tip of the Red Sea, were particularly resistant to higher temperatures. But we wanted to study the full molecular mechanism behind this resistance," says Romain Savary, a postdoc at EPFL's Laboratory for Biological Geochemistry (LGB) and lead author of the study, which appears today in PNAS. What the scientists found was telling: those corals, as well as the algae and bacteria they live in symbiosis with, can withstand average temperatures some 5°C higher than what they typically experience. And despite the severity with which climate change is taking place, it's unlikely that Red Sea temperatures will rise more than 5°C by the end of the century. "This gives us real hope that we can save at least one major coral reef ecosystem for future generations," says Anders Meibom, head of the LGB.

Taking it in stride

To conduct their study, the scientists subjected Gulf of Aqaba corals to a range of heat stresses including the higher temperatures likely to occur in the coming decades. The average maximum monthly temperature in these waters is currently around 27°C, so the scientists exposed coral samples to temperatures of 29.5°C, 32°C and 34.5°C, over both a short time period (three hours) and a longer one (one week). The scientists measured the corals' and symbiotic algae's gene expression both during and after the heat stress test, and determined the composition of the microbiome residing in the corals.

"The main thing we found is that these corals currently live in temperatures well below the maximum they can withstand with their molecular machinery, which means they're naturally shielded against the temperature increases that will probably occur over the next 100 or even 200 years," says Savary. "Our measurements showed that at temperatures of up to 32°C, the corals and their symbiotic organisms were able to molecularly recover and acclimate to both short-term and long-term heat stress without any major consequences." This offers genuine hope to scientists - although warmer waters are not the only threat facing this exceptional natural heritage.

This is the first time scientists have conducted a genetic analysis of coral samples on such a broad scale, and their findings reveal how these heat-resistant corals respond at the most fundamental level - gene expression. They can also be used as a basis for identifying 'super corals.' According to Meibom, "Romain's research gives us insight into the specific genetic factors that allow corals to survive. His study also indicates that an entire symphony of genetic expression is at work to give corals this extraordinary power." This sets a standard for what "super coral" gene expression looks like during a heat stress and a recovery. But could Red Sea corals be used to one day repopulate the Great Barrier Reef? "Corals are highly dependent on their surroundings," says Meibom. "They can adapt to new environments only after a long, natural colonization process. What's more, the Great Barrier Reef is the size of Italy - it would be impossible to repopulate it artificially."

Sailing towards the future

The scientists' work was made possible thanks to two unique research instruments: the Red Sea Simulator (RSS), developed by the Interuniversity Institute for Marine Sciences in Eilat, Israel; and the Coral Bleaching Automated Stress System (CBASS), developed by a team of researchers in the US. Their findings have laid the groundwork for a much more ambitious project that will be led by the Transnational Red Sea Center (TRSC, http://www.trsc.org), which was set up at EPFL in 2019. This new project will kick off this summer and take place over four years. "We'll sail the entire Red Sea - some 2,000 km long - on the research vessel Fleur de Passion, owned by our partner the Fondation Pacifique," says Meibom. "The goal will be to map the heat tolerance levels and the diversity of all the different types of corals found in these waters. Water temperatures rise as you head further south on the Red Sea, with a 5-6°C differential between the northern and southern tips. That's what makes it a perfect real-world laboratory for studying these ecosystems. It's as if you're sailing towards the future as you head south."

And what does that glimpse into the future tell us? Some corals in the southern Red Sea are already starting to bleach. Savary believes there's just one solution: "We have to protect these corals and shield them from local stressors, which are mainly sources of pollution and physical destruction. That way we can keep a stock of 'natural super corals' for potentially recolonizing areas that have been hit particularly hard by climate-change-induced heat waves." 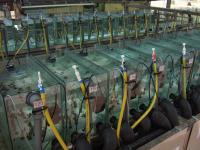