As he discussed how the pallid sturgeon has responded to differing conditions along the Missouri River, the mind of soft-spoken fish ecologist Mark Pegg drifted to a Def Leppard lyric inspired by Neil Young.

"What is the old song? 'It's better to burn out than to fade away?' In this case, I'm not sure that's true," said Pegg, a professor with the University of Nebraska-Lincoln's School of Natural Resources.

Pegg was referring not to the existential fate of the shovel-nosed, long-lived endangered species, but to the life cycles of individual specimens. He was talking about the impressive developmental flexibility, but also the troubling developmental deficits, that some specimens have shown in the face of human intervention on the Missouri -- the power of nurture, or lack thereof, revealed by an unprecedented new study.

The study found that pallid sturgeon stocked around the lower basin of Nebraska, Iowa and Missouri live an average of just 19.8 years -- nearly three times shorter than in the upper basin of Montana and North Dakota, where the average was an estimated 56.4 years.

Combined with the fact that females in the lower basin weighed an average of seven times less than in the upper basin, that altered trajectory also seemed to dramatically influence reproduction. The shorter-lived female specimens appeared to compensate by reaching sexual maturity at around age 10, compared with age 17 in their longer-lived counterparts. Despite the head start, though, their looming demise caught up with them: The lower-basin females spawned between three and 11 times, well below the range of 13-20 times among females in the upper basin. According to the estimates of the research team, the lower-basin females consequently laid about 10 times fewer eggs over their lifetimes.

The researchers, led by the University of Georgia's Martin Hamel, came to the striking conclusions by analyzing existing data gathered from both wild and hatchery-raised sturgeon -- more than 1,200 in total. In the mid-2000s, a cadre of agencies began regularly measuring and monitoring the age, size and fertility of wild specimens in an effort to learn more about threats to the endangered species. But an even earlier effort, begun in the mid-1990s, sought to supplement the species' declining numbers.

"So they grabbed whatever fish they could that were of reproductive size and age and started making little sturgeon," Pegg said.

The sturgeon they initially grabbed and set to spawning in hatcheries came from the upper basin in Montana. When it came time to release those offspring into the Missouri River, the agencies stocked them across both the upper basin, where their parents had lived, and the lower basin.

Years later, that decision would manifest as a boon for Hamel, Pegg and their colleagues, Kirk Steffensen of the Nebraska Game and Parks Commission and Jonathan Spurgeon of the University of Arkansas at Pine Bluff. Because of it, the researchers had access to an exceedingly rare dataset: substantial numbers of genetically similar specimens left to grow and mature in two environments separated by more than a thousand miles. Any major differences in their development, then, would almost certainly arise from differences in those environments -- an ichthyological analog of studying identical human twins raised in different households.

"Replicating that (approach) is horribly difficult, especially in Mother Nature's lab," Pegg said. "We just don't have the space, time or resources to really do that. So this was more of a moment of serendipity than any real planning on our part.

"We knew where the fish were coming from, and we could start to look at how they were actually responding to their new environment."

Pegg said the extreme developmental differences the team discovered between the upper- and lower-basin populations probably speak to at least two major differences in their environments: depth and currents. Though the upper basin has undergone some human-related change over the past few centuries, it more closely resembles the relatively shallow, slow-moving river it was before the arrival of white colonialists. Even where it is deeper and faster, he said, it still offers some slower-flowing refuges where larvae and finger-length juveniles can settle and grow without much stress. Those refuges also house food, from algae to minnows, that make life easier for larvae and adults alike.

The lower basin, by contrast, features more reservoirs and deeper channels that were carved into the river to promote currents and ease the conveyance of ships down the river. The success of those efforts, Pegg said, has probably forced the sturgeon to invest an inordinate amount of time and energy essentially swimming in place -- investments that likely slow growth among juveniles and keep females from putting on the weight that is strongly tied to fertility.

"They have to spend a lot of energy maintaining position, as opposed to up in Montana ... where they have the ability to get bigger because they're not spending a lot of energy keeping themselves in the water column.

"We're sort of shortchanging the fish down here in a lot of different ways."

The team's study follows in the wake of others that have demonstrated the ability of organisms, including fish, to adjust their development and behavior in response to their environments -- and on timelines far too short for genetic-based evolution to explain. Some research, for instance, has tracked the fates of largemouth bass that were transported from Florida to bodies of water farther north. But from what Pegg has seen, no prior studies have examined the phenomenon on such a wide scale, either geographically or numerically.

"To my knowledge, this is the one and only that's covering literally 2,500 miles of river or so," he said of the study, published in the journal Scientific Reports. "From a fish perspective, this is pretty unprecedented, as far as I know, in the literature.

"Most of the other (similar studies) were dealing with tanks of fish or, at best, a pond of fish with maybe a few hundred. But we're talking about -- at least in the lower part of the river, where we really saw that change -- literally thousands of individuals. So I think from the magnitude of sample size, our effect is pretty large, in terms of what we can say about the results."

And what they can say, according to Pegg, is that the findings make a dramatic and literal case for the downstream effects of environmental change. While those effects may not be solely responsible for the species' endangered status, they probably account for some of the difficulty in resuscitating its population, he said. But they might also point the way to more successful conservation efforts, and more careful planning, down the line.

"What it really highlights is that we do need to be careful about just willy-nilly stocking or reintroducing fish or birds or mammals into places they may or may not be well-adapted to," he said. "At least in this case, (the sturgeon) seem to be holding on and maybe have adjusted to their new environments a little better than some other places. But we aren't necessarily producing a viable population based on those original stockings (to the extent) that we'd hoped for. So taking care to properly think through and plan with the best science we have available to us is certainly one of the big take-home messages." 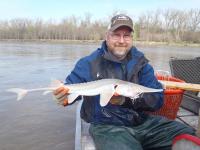 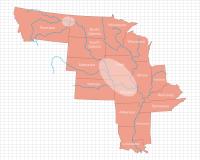