CAMBRIDGE, Mass. -- Genetics may play a surprisingly small role in determining the precise wiring of the mammalian nervous system, according to painstaking mapping of every neuron projecting to a small muscle mice use to move their ears. These first-ever mammalian "connectomes," or complete neural circuit diagrams, reveal that neural wiring can vary widely even in paired tissues on the left and right sides of the same animal.

Scientists at Harvard University and the Massachusetts Institute of Technology describe the work this week in the journal PLoS Biology, accompanied by vivid images depicting neurons that are strikingly treelike, but also tremendously varied.

"We had expected to find a great degree of neural symmetry in the same mouse's two interscutularis muscles, but this isn't even close to true," says Jeff W. Lichtman, professor of molecular and cellular biology in Harvard's Faculty of Arts and Sciences.

"It looks like the mammalian nervous system may be a bit like a football game," he adds. "Even when the rules are the same, every single outcome is unique."

Curiously, the connectome of the mouse interscutularis -- a muscle also found in dogs, rats, and other mammals that readily move their ears -- reveals that some of its neurons are as much as 25 percent longer than is necessary. This casts doubt on a longstanding assumption among neuroscientists that neural wiring length is generally minimized to conserve space, energy, and resources.

"This well-known hypothesis that wiring length should be minimized has been in the scientific literature for decades," says Ju Lu, a postdoctoral researcher in molecular and cellular biology at Harvard. "It's very surprising, frankly, to find so much excess wiring in the mammalian nervous system."

Lichtman and Lu's work represents only the second connectome to date, following one for the worm Caenorhabditis elegans. While their task initially appeared manageable -- the entire interscutularis muscle is but a few millimeters in length -- teasing out the muscle's tangle of about 15 intricately branched and intertwined axons proved fiendishly complex.

"It's a bit like taking a giant plate of spaghetti and, without unraveling it, trying to figure out which strand goes where," says Lu. "Except in this case, each strand of spaghetti has up to 37 branches."

Working with mice containing a gene that causes motor neurons to fluoresce, Lichtman and Lu used an automated microscope to gather tens of thousands of images. These images were analyzed with semi-automated tracing tools, although the need for frequent corrections and manual editing by Lu slowed the pace of the mapping to a scant half-millimeter per hour.

Connectomes from a mouse's two interscutularis muscles depict dramatically different neural circuitry even within mirror-image tissues from the same animal.

"Comparison of each neuron and its counterpart on the opposite side of the animal revealed that each connectome was unique," Lichtman says, "demonstrating wiring diagrams that differ substantially in form, even within a common genetic background."

Lichtman says the research suggests the mammalian nervous system is in some ways unexpectedly primitive, its freeform structure lacking the regimentation seen in insects and worms. But, he adds, this seeming randomness may be advantageous.

"This may explain why humans and other mammals can quickly adapt their behaviors to a changing environment," Lichtman says. "We may be less perfected in our genetic evolution, but our flexible neural wiring may allow us to undergo behavioral evolution at a very rapid rate."

Such variation in the nervous system, he adds, could help explain why different humans, each equipped with the same neural building blocks, excel at tasks ranging from dancing to mathematical computations, and from crossword puzzles to bowling.

Lichtman and Lu's co-authors are Juan Carlos Tapia of Harvard's Department of Molecular and Cellular Biology and Olivia L. White of MIT's Department of Physics. Their work was funded by the National Institutes of Health, the Gatsby Charitable Foundation, and Microsoft Research.

Diverse 'connectomes' hint at genes' limits in the nervous system 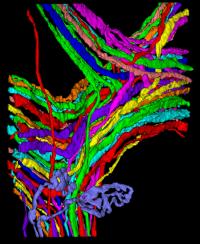 Example of a Reconstructed Image Stack 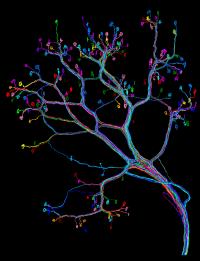