Octopuses are known to sleep and to change color while they do it. Now, a study publishing March 25 in the journal iScience finds that these color changes are characteristic of two major alternating sleep states: an "active sleep" stage and a "quiet sleep" stage. The researchers say that the findings have implications for the evolution of sleep and might indicate that it's possible for octopuses to experience something akin to dreams.

Scientists used to think that only mammals and birds had two sleep states. More recently, it was shown that some reptiles also show non-REM and REM sleep. A REM-like sleep state was reported also in cuttlefish, a cephalopod relative of the octopus.

"That led us to wonder whether we might see evidence of two sleep states in octopuses, too," says senior author Sidarta Ribeiro of the Brain Institute of the Federal University of Rio Grande do Norte, Brazil. "Octopuses have the most centralized nervous system of any invertebrate and are known to have a high learning capacity."

To find out, the researchers captured video recordings of octopuses in the lab. They found that during 'quiet sleep' the animals were still and quiet, with pale skin and eye pupils contracted to a slit. During 'active sleep,' it was a different story. The animals dynamically changed their skin color and texture. They also moved their eyes while contracting their suckers and body with muscular twitches.

"What makes it more interesting is that this 'active sleep' mostly occurs after a long 'quiet sleep'--generally longer than 6 minutes--and that it has a characteristic periodicity," Ribeiro says.

The cycle would repeat at about 30- to 40-minute intervals. To establish that these states indeed represented sleep, the researchers measured the octopuses' arousal threshold using visual and tactile stimulation tests. The results of those tests showed that in both 'active' and 'quiet sleep' states, the octopuses needed a strong stimulus to evoke a behavioral response in comparison with the alert state. In other words, they were sleeping.

The findings have interesting implications for octopuses and for the evolution of sleep. They also raise intriguing new questions.

"The alternation of sleep states observed in the Octopus insularis seems quite similar to ours, despite the enormous evolutionary distance between cephalopods and vertebrates, with an early divergence of lineages around 500 million years ago," says first author and graduate student Sylvia Medeiros of the Brain Institute of the Federal University of Rio Grande do Norte, Brazil.

"If in fact two different sleep states evolved twice independently in vertebrates and invertebrates, what are the essential evolutionary pressures shaping this physiological process?" she asks. "The independent evolution in cephalopods of an 'active sleep' analogous to vertebrate REM sleep may reflect an emerging property common to centralized nervous systems that reach a certain complexity."

Medeiros also says that the findings raise the possibility that octopuses experience something similar to dreaming. "It is not possible to affirm that they are dreaming because they cannot tell us that, but our results suggest that during 'active sleep' the octopus might experience a state analogous to REM sleep, which is the state during which humans dream the most," she says. "If octopuses indeed dream, it is unlikely that they experience complex symbolic plots like we do. 'Active sleep' in the octopus has a very short duration--typically from a few seconds to one minute. If during this state there is any dreaming going on, it should be more like small videoclips, or even gifs."

In future studies, the researchers would like to record neural data from cephalopods to better understand what happens when they sleep. They're also curious about the role of sleep in the animals' metabolisms, thinking, and learning.

"It is tempting to speculate that, just like in humans, dreaming in the octopus may help to adapt to environmental challenges and promote learning," Ribeiro says. "Do octopuses have nightmares? Could octopuses' dreams be inscribed on their dynamic skin patterns? Could we learn to read their dreams by quantifying these changes?"

iScience (@iScience_CP) is an open access journal from Cell Press that provides a platform for original research and interdisciplinary thinking in the life, physical, and earth sciences. The primary criterion for publication in iScience is a significant contribution to a relevant field combined with robust results and underlying methodology. Visit http://www.cell.com/iscience. To receive Cell Press media alerts, contact press@cell.com. 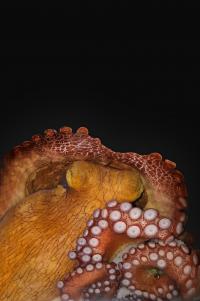