It's no surprise that people behave differently depending upon what they've learned from other people, from the language they speak to the foods they like to eat. But now researchers reporting in the journal Current Biology on May 24 have found that the same is true of banded mongooses.

"Cultural inheritance, the transmission of socially learned information across generations, is a huge influence on human behavior: we behave the way we do not just because of our genes, but also because of what we learn from parents, teachers, and cultural role models," says Michael Cant from the University of Exeter. "It is less well appreciated that cultural inheritance is a major force shaping behavior in a wide range of non-human animals, from insects to apes."

In fact, researchers have found some of the clearest evidence for cultural inheritance in fish and birds. In these species, offspring can be switched among parents to disentangle the influence of cultural versus genetic factors. But this kind of experiment is usually impossible in mammals.

In the new study, Cant and colleagues took advantage of a quirk in banded mongoose society. Banded mongooses live in highly cooperative groups in which offspring form exclusive one-to-one caring relationships with unrelated adults known as escorts. In fact, Cant's team recently showed that individuals are no more closely related to their escorts than they are to a random group member, so the escort system represents a natural "cross-fostering" experiment.

To explore the influence of escorts on eating habits, the researchers chemically analyzed the whiskers of individual mongooses. Those studies showed that the mongooses "inherit" their feeding preferences from their escorts and not from their biological parents, based upon what those older individuals teach them early in life. Those learned behaviors also last a lifetime.

"It was a big surprise to discover that foraging behavior learned in the first three months of life lasts a lifetime," Cant says. "To illustrate, our data show that even middle-aged mongooses are still copying the foraging behavior of the escort that looked after them for a short period when they were a small pup, years before. This is pretty remarkable, since we have no evidence that pups and escorts preferentially hang out together after pups become independent."

The researchers went on to test a classic prediction of cultural evolution theory: that one-to-one cultural inheritance can maintain diversity in culturally transmitted traits. It stands to reason that if all individuals in a group learn from a single teacher, they will all tend to behave in the same way. But, theoretically, if individuals instead learn from a single role model, cultural inheritance can work to maintain diversity.

As predicted, the researchers found that pups with a single role model stuck to what they learned from that one individual. In contrast, those with multiple role models tended to wind up somewhere in between. The findings in mongooses therefore help to understand how genetic and cultural inheritance mechanisms in general combine to shape individual diversity in animal populations. They also suggest cultural inheritance may play an unexpectedly important role in many animals.

"Cultural inheritance is a potentially pervasive influence on behavior even in the most unlikely animals, and certainly doesn't require a large brain or cognitive complexity," Cant says.

Ultimately, the researchers say, they'd like "to understand not just how different early life influences on development work in social organisms, but why they evolved." 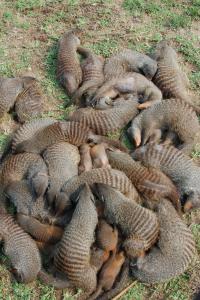