Japanese researchers report a new ion detector, MARIO. Using it, they show that changes in the intracellular concentration of free magnesium ions (Mg2+) is critical for the chromosome folding that must occur for cells to divide. The findings, which can be read in Current Biology, provide a new mechanism for chromosome organization.

Cell division is essential for new cells to form in the body, be it during normal growth or to repair lost or damaged cells. During cell division, chromosomes begin to condense and remain so until the division is complete. A number of proteins in the cell control the condensation, but so too do free ions such as Mg2+.

"Chromosomes are negatively charged. Free cations like Mg2+ neutralize the charge so that the chromosomes can condense during cell division," explains Prof. Kazuhiro Maeshima at the National Institute of Genetics (NIG), who studies the 3D dynamics of DNA and led the study.

Although it is known that Mg2+ might have an important role in chromosome rearrangement, quantitatively measuring Mg2+ concentration during cell division has been a challenge. Prof. Maeshima therefore teamed with Osaka University Prof. Takeharu Nagai, a leader in the development of chemical probes for intracellular signaling. Together, they formulated MARIO (Magnesium Ratiometric Indicator for Optical Imaging), a fluorescent probe that measures Mg2+ concentration.

MARIO is based on a calcium indicator known as YC3.60 and is composed of enhanced cyan fluorescent protein, the yellow fluorescent protein VENUS, and a Mg2+-binding domain found in bacteria known as CorA. Mg2+ binding to CorA causes a structural change in MARIO that changes the fluorescence signal.

"We could improve MARIO's performance, both in terms of Mg2+affinity and dynamic range, by truncating CorA and by introducing random mutations into the structure," says Nagai.

Mg2+ itself is abundant in the cell, but not in free form. Instead it is usually captured by ATP. Using MARIO, the researchers found that during cell division, free Mg2+ greatly increases, enabling the chromosomes to condense. The increase peaked during the transition from metaphase to anaphase, which marks the period in cell division that the cell membrane begins showing signs of breaking into two cells.

"We found a clear relationship between ATP levels and free Mg2+," says Maeshima. "The less ATP, the more Mg2+ and the more chromosome condensation. If we decrease ATP levels, then chromosomes even more condense. We propose a novel mechanism by which dynamics are regulated during cell division, in which ATP-bound Mg2+is released by the hydrolysis of ATP."

Because cell division is an energy intensive event, it is presumed that the cell will consume more ATP.

"We are not sure what causes the ATP demand. But a number of actions are taken during cell division, so we are not surprised to see Mg2+ levels increase.

A number of diseases like cancer are caused by abnormalities in cell division. We expect that understanding how chromosome condensation is regulated will help us understand how these diseases develop and possible ways to treat them," says Maeshima. 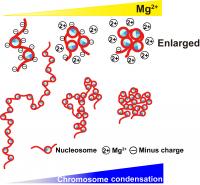