"Understanding when stress blocks or enhances memory in a simple animal model may help elucidate the mechanisms in more complex animals such as humans", explained Dr Sarah Dalesman.

The researchers are presenting their work at the Society for Experimental Biology Annual Conference in Prague on Wednesday 30th June 2010.

Isolation had no effect on long-term memory (LTM) formation but when the snails were overcrowded or exposed to water with low calcium, which they need to grow their shells, their ability to form LTM was greatly reduced.

However, adding predatory crayfish scent into the water "super-sensitised" the snails, promoting LTM formation. It even reversed the effect of crowding and low-calcium, allowing the snails to remember their training.

"Predator scent seems to be able to rescue memory formation in the presence of all memory blocking stressors that we have investigated so far", explained Dr Sarah Dalesman.

The ability to form memory allows the pond snail to respond to experience during its lifetime and alter its behaviour appropriately. Dr Sarah Dalesman added, "Being able to remember which foods made them sick and which foods were alright will increase their probability of finding suitable food in the future"

Building on over 14 years of research at Professor Lukowiak's laboratory at the University of Calgary, Lymnaea stagnalis is an ideal candidate for memory tests, say the researchers.

They have large neurons, which allow them to pin-point exactly where in the brain memory is formed. They also have a simple set of behaviours making measuring memory formation a relatively simple task.

This work is currently ongoing and aims to develop an understanding of how stressors interact in Lymnaea stagnalis and to shed light on the effect of stress on memory formation in higher animals, including humans.

When oxygen levels in the water are low, instead of taking up oxygen directly through their skin, pond snails come up to the surface and breathe air through a rudimentary lung, opened to the atmosphere via the pneumostome.

During the "training", the scientists encouraged the snails to come up to the surface to breathe by artificially reducing the oxygen in the water, making it hypoxic.

When the snail opened its pneumostome at the surface, it was given a gentle poke with a wooden stick, causing it to close again. When this was repeated over a 2 hour training period, under normal conditions the snail remembered the poke and reduced the number of times it came up for air a day later, showing long term memory (LTM).

The scientists believe that the ability to remember unfamiliar environments, new predators and food sources is vital to the survival of the pond snail in the wild.

Can you make a snail forget? 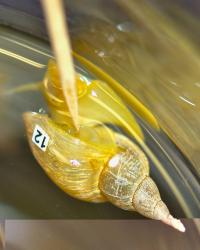