Researchers in Japan and the Netherlands jointly developed an originative radio receiver DESHIMA (Deep Spectroscopic High-redshift Mapper) and successfully obtained the first spectra and images with it. Combining the ability to detect a wide frequency range of cosmic radio waves and to disperse them into different frequencies, DESHIMA demonstrated its unique power to efficiently measure the distances to the remotest objects as well as to map the distributions of various molecules in nearby cosmic clouds.

"Deshima" (or, Dejima) was a Dutch trading post in Japan built in the mid-17th century. For 200 years, Deshima was Japan's precious window to the world. Now, the two friendly nations open up another window to a new world, the vast Universe, with innovative nanotechnology.

"DESHIMA is a completely new type of astronomical instrument with which a 3D map of the early Universe can be constructed," said Akira Endo, a researcher at the Delft University of Technology and the leader of the DESHIMA project.

The uniqueness of DESHIMA is that it can disperse the wide frequency range of radio waves into different frequencies. DESHIMA's instantaneous frequency width (332 - 377 GHz) is more than five times wider than that of the receivers used in the Atacama Large Millimeter/submillimeter Array (ALMA).

"There are many existing radio receivers with spectroscopic capability, however, the covered frequency range in one observation is quite limited," says Yoichi Tamura, an associate professor at Nagoya University. "On the other hand, DESHIMA achieves an ideal balance between the width of frequency range and spectroscopic performance."

Behind this unique capability is the innovative nanotechnology. The research team developed a special superconducting electric circuit, a filterbank, in which radio waves are dispersed into different frequencies, like a sorting conveyor in a fulfillment center. At the end of the "signal conveyors," sensitive Microwave Kinetic Inductance Detectors (MKID) are located and detect the dispersed signals. DESHIMA is the world's first instrument to combine these two technologies on a chip to detect radio waves from the Universe.

As its first test observation, DESHIMA was installed on a 10-m submillimeter telescope, the Atacama Submillimeter Telescope Experiment (ASTE) operated by the National Astronomical Observatory of Japan (NAOJ) in Northern Chile. The first target was the active galaxy VV 114. The distance to the galaxy has been already measured to be 290 million light-years. DESHIMA successfully detected the signal from the carbon monoxide (CO) molecules in the galaxy at the right frequency expected from the expansion of the Universe.

When astronomers try to detect radio emission from a remote object with unknown distance, usually they sweep a certain range of frequency. Using conventional radio receivers with narrow bandwidth, they need to repeat observations while slightly shifting the frequency. By contrast, the wide-band DESHIMA greatly improves the efficiency of the emission search and helps researchers to produce maps of distant galaxies.

DESHIMA's high performance has also been proven for observations of nearby molecular clouds. DESHIMA simultaneously captured and imaged the distribution of the emission signals from three molecules, CO, formyl ion (HCO+), and hydrogen cyanide (HCN) in the Orion nebula.

The research team is aiming to further improve the capability of DESHIMA. "Our goal is to expand the frequency width, improve sensitivity, and develop a radio camera with 16 pixels," said Kotaro Kohno, a professor of The University of Tokyo. "The future DESHIMA will be an important point of departure in various astronomy fields."

Note 1. ASTE is located at an altitude of 4860 m above sea level in the Atacama Desert, close to the site of ALMA. Atacama's clear sky is a great fit for submillimeter wave observations.

New voyage to the universe from DESHIMA 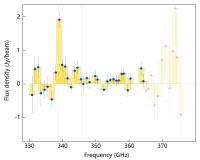 Spectrum of the Galaxy VV 114 Obtained with ASTE