Allergy sufferers are no strangers to problems with pollen. But now - due to climate change - the pollen season is lasting longer and starting earlier than ever before, meaning more days of itchy eyes and runny noses. Warmer temperatures cause flowers to bloom earlier, while higher CO2 levels cause more pollen to be produced.

The effects of climate change on the pollen season have been studied at-length, and according to some scientists, has grown by as much as 20 days in the past 30 years, at least in the US and Canada. But one important element is often overlooked - "Pollen is meant to fly," says Dr Annette Menzel, Professor of ecoclimatology at the Technical University of Munich. "Transport phenomena have to be taken into account."

Menzel and her team focused on Bavaria - a state in southeast Germany - and used six pollen monitoring stations scattered around the region to analyze data. Their results were recently published in Frontiers in Allergy. They found that certain species of pollen, such as from hazel shrubs and alder trees, advanced the start of their seasons by up to 2 days per year, over a period of 30 years (between 1987 and 2017). Other species, which tend to bloom later in the year, such as birch and ash trees, moved their seasons 0.5 days earlier on average each year, across that same time period.

Pollen can travel hundreds of kilometers and, with changing weather patterns and altered species distributions, it's possible that people are becoming exposed to "new" pollen species - meaning pollen that our bodies are unaccustomed to encountering each year.

While it can sometimes be difficult to differentiate between local and transported pollen, the researchers focused on pre-season transports. So, for example, if pollen from birch trees was present at the monitoring station, but local birch trees would not flower for at least another 10 days, that pollen was considered to be transported from far away.

"We were surprised that pre-season pollen transport is a quite common phenomenon being observed in two-thirds of the cases," says Menzel. As for why it's important to understand how much pollen is from far away, Yuan says that: "Especially for light-weight allergenic [pollen], long distance transport could seriously influence local human health."

By examining another element besides simple pollen concentration, scientists can delve deeper into how exactly the pollen season is being affected by climate change. For example, Menzel says that the pollen season may be even longer than estimated based on flowering observations by "taking into account pollen transport, as it has been done in our current study."

While the Munich study did not track how far pollen was transported, and only differentiated between local and long-range transport (meaning pollen coming from outside Bavaria), it provides a crucial key in our understanding of annual pollen patterns. Yuan says that future studies should account for "climate change scenarios [and] land use/land cover changes." He also adds that citizen scientists may be able to contribute to pollen studies, who can help collect local observations and contribute to data collection.

It doesn't look like the pollen season will shorten any time soon, but more research on the subject can provide a better understanding of global patterns and changes so that we can better address these issues in the future. 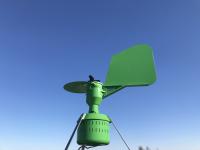