With the race for renewable energy sources in full swing, plants offer one of the most promising candidates for replacing crude oil. Lignocellulose in particular - biomass from non-edible plants like grass, leaves, and wood that don't compete with food crops - is abundant and renewable and offers a great alternative source to petroleum for a whole range of chemicals.

In order to extract useful chemicals from it, lignocellulose is first pretreated to "break it up" and make it easier to further process. Then it's exposed to enzymes that solubilize cellulose, which is a chain of linked up sugars (glucose). This step can be done by adding to the pre-treated lignocellulose a microorganism that naturally produces the necessary, cellulose-cleaving enzymes, e.g. a fungus.

The enzymes "crack" the cellulose and turn it into its individual sugars, which can be further processed to produce a key chemical: lactic acid. This second step is also accomplished with a microorganism, a bacterium that "eats" the sugars and produces lactic acid when there's no oxygen around.

In the final step of this microbial assembly line, the lactic acid can then be processed to make a whole host of useful chemicals.

A team of scientists from the Bern University of Applied Sciences (BFH), the University of Cambridge, and EPFL have made this assembly chain possible in a single setup and demonstrated this conversion can be made more versatile and modular. By easily swapping out the microorganisms in the final, lactic-acid processing, step, they can produce a whole range of useful chemicals.

The breakthrough study is published in Science, and was carried out by Robert Shahab, an EPFL PhD student in Professor Jeremy Luterbacher's lab, while working at the lab of Professor Michael Studer at the BFH, who led the study.

The researchers present what they refer to as a "lactate platform", which is essentially a spatially segregated bioreactor that allows multiple different microorganisms to co-exist, each performing one of the three steps of lignocellulose processing.

The platform consists of a tubular membrane that lets a defined amount of oxygen to go through it. On the tube's surface can be grown the fungus that consumes all oxygen that passes through the membrane, and provides the enzymes that will break up cellulose into sugars. Further away from the membrane, and therefore in an atmosphere without oxygen, grow the bacteria that will "eat" the sugars and turn them into lactic acid.

But the innovation that Shahab made was in the last step. By using different lactic acid-fermenting microorganisms, he was able to produce different useful chemicals. One example was butyric acid, which can be used in bioplastics, while Luterbacher's lab recently showed that it can even be turned into a jet fuel.

The work demonstrates the benefits of mixed microbial cultures in lignocellulose biomass processing: modularity and the ability to convert complex substrates to valuable platform chemicals.

"The results achieved with the lactate platform nicely show the advantages of artificial microbial consortia to form new products from lignocellulose," says Michael Studer. "The creation of niches in otherwise homogeneous bioreactors is a valuable tool to co-cultivate different microorganisms."

"Fermenting lignocellulose to a lot of different products was a significant amount of work but it was important to show how versatile the lactate platform is," says Robert Shahab. "To see the formation of lactate and the conversion into target products was a great experience as it showed that the concept of the lactate platform worked in practice."

Jeremy Luterbacher adds: "The ultimate goal is to rebuild a green manufacturing sector to replace one that produces many products from crude oil. A method that introduces flexibility and modularity is an important step in that direction." 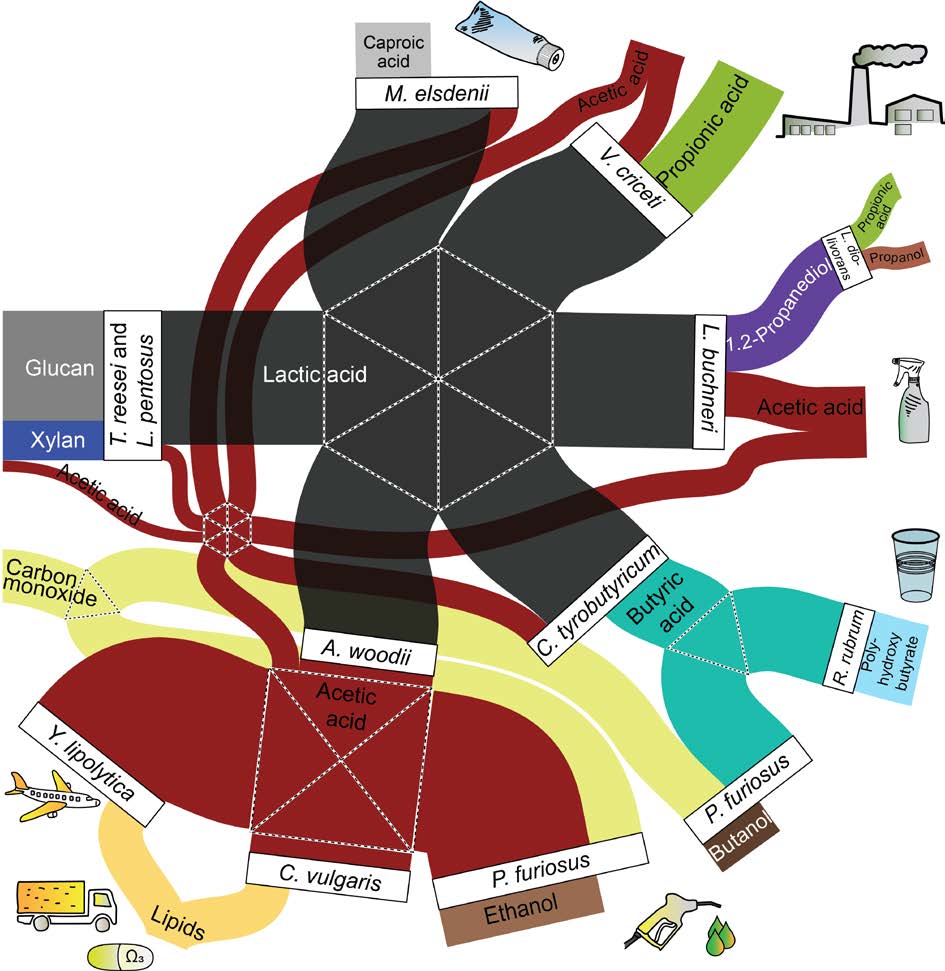