One day a polar bear shows up at Sophia's house asking if it can come inside. Its habitat melted and the bear needs a new home. So starts "The Tantrum that Saved the World," a new children's book about climate change's effects on creatures and communities around the world, by Penn State researcher Michael Mann and author and illustrator Megan Herbert.

After the polar bear makes itself comfortable, more climate refugees show up -- honeybees confused by the seasons, a flamingo whose breeding ground was disrupted, an i-Kiribati family whose house was submerged by water. Finally, Sophia, tired of being ignored and postponed, throws a tantrum to make the world's decision-makers take notice, and in the end becomes a hero by channeling her energy into action to effect positive change.

Mann and Herbert created the story because they wanted a way to discuss climate change with their own children, but could not find a book that would suffice.

"Both Mike and I are parents, and we were worried about the state of things not just for us but for our kids, and we wanted to do something about it," said Herbert, a film and television script writer and children's book illustrator.

The authors first met at Earth 101, a conference bringing together climate scientists with film and media professionals to discuss ways to raise awareness about climate change. After months of discussions and research, they settled on an approach to their book, which includes not only a story but also supplemental scientific information.

"The idea was really to have this story stand on its own, but for parents and kids who want to dig deeper there's that second part which provides further scientific context," said Mann, distinguished professor of atmospheric science and director of the Earth System Science Center. "Meg uses her wonderful artistic abilities to really make those sections engaging for our audience too."

The scientific section of the book provides readers with a detailed look at how climate change is impacting the various characters in the book. It also shows the book's characters in their native land or habitat, tying the book together visually. The story features an equal mix of humans and animals from regions around the world, which was intentional.

"We want people to understand climate change is not just affecting one or two areas but it's affecting many, and those issues are quite interconnected and have effects on other places," Herbert said.

At first the authors struggled to find a format that would work best for children.

In addition to the story and scientific information, the book includes an action-oriented poster outlining what children can do in their daily lives to make a positive difference, whether it's helping parents choose locally sourced foods at the grocery store or, when they are older, contacting representatives or starting petitions.

"It was important to us to have empowering stories and narratives for children today, to make sure they feel emboldened to be part of the process of solving the great problems we face," said Mann.

"The Tantrum that Saved the World" is also printed in an environmentally friendly way, showing the authors' commitment to making a positive difference. The books will be printed with 100 percent recycled material, using soy ink that is both biodegradable and is derived from plants. To address the carbon footprint of printing and shipping costs, the authors are partnering with companies that help organizations offset their operations through planting trees or providing renewable energy supplies to low-income communities.

The project launched through the crowdfunding platform Kickstarter, which gave them funds to pursue these nontraditional publishing routes. It also, said Mann, allowed them to get the book out to the public quickly.

"We didn't have to shop around to find the right publisher, which could take years," he said. "We wanted this to happen now."

The book is being published by World Saving Books. The authors hope to release an e-book version in December 2017 followed by a print version in 2018.

"What we're really hoping is that we can build a community of people who are making change within their own families to live in a different way, and that then grows to change in their schools and communities, and it grows from there," Herbert said. 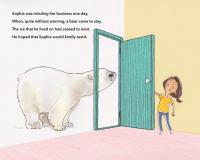