Berkeley geologists have uncovered compelling evidence that an asteroid impact on Earth 66 million years ago accelerated the eruptions of volcanoes in India for hundreds of thousands of years, and that together these planet-wide catastrophes caused the extinction of many land and marine animals, including the dinosaurs.

For 35 years, paleontologists and geologists have debated the role these two global events played in the last mass extinction, with one side claiming the eruptions were irrelevant, and the other side claiming the impact was a blip in a long-term die-off.

The new evidence includes the most accurate dates yet for the volcanic eruptions before and after the impact. The new dates show that the Deccan Traps lava flows, which at the time were erupting at a slower pace, doubled in output within 50,000 years of the asteroid or comet impact that is thought to have initiated the last mass extinction on Earth.

Both the impact and the volcanism would have blanketed the planet with dust and noxious fumes, drastically changing the climate and sending many species to an early grave.

"Based on our dating of the lavas, we can be pretty certain that the volcanism and the impact occurred within 50,000 years of the extinction, so it becomes somewhat artificial to distinguish between them as killing mechanisms: both phenomena were clearly at work at the same time," said lead researcher Paul Renne, a UC Berkeley professor-in-residence of earth and planetary science and director of the Berkeley Geochronology Center. "It is going to be basically impossible to ascribe actual atmospheric effects to one or the other. They both happened at the same time."

The geologists argue that the impact abruptly changed the volcanoes' plumbing system, which produced major changes in the chemistry and frequency of the eruptions. After this change, long-term volcanic eruptions likely delayed recovery of life for 500,000 years after the KT boundary, the term for the end of the Cretaceous and the beginning of the Tertiary period when large land animals and many small sea creatures disappeared from the fossil record.

"The biodiversity and chemical signature of the ocean took about half a million years to really recover after the KT boundary, which is about how long the accelerated volcanism lasted," Renne said. "We are proposing that the volcanism unleashed and accelerated right at the KT boundary suppressed the recovery until the volcanoes waned."

Co-author Mark Richards, a UC Berkeley professor of earth and planetary science and the one who originally proposed that the comet or asteroid impact reignited the Deccan Traps lava flows, is agnostic about which event was the real death knell for much of life on Earth. But the link between the impact and the flood basalts is becoming harder to deny.

"If our high-precision dates continue to pin these three events - the impact, the extinction and the major pulse of volcanism - closer and closer together, people are going to have to accept the likelihood of a connection among them. The scenario we are suggesting - that the impact triggered the volcanism - does in fact reconcile what had previously appeared to be an unimaginable coincidence," he said.

Renne, Richards and their colleagues will publish the new dates for the Deccan Traps eruptions in the Oct. 2 issue of the journal Science.

Since 1980, when UC Berkeley geologist Walter Alvarez and his father, the late UC Berkeley physicist Luis Alvarez, discovered evidence of a comet or asteroid impact on Earth 66 million years ago, scientists have argued about whether the impact was the cause of the mass extinction that occurred at the same time, the end of the Cretaceous period, or the KT boundary. Some argued that the huge volcanic eruptions in India known as the Deccan Traps, which occurred around the same time, were the main culprit in the extinctions. Others insisted the death knell had been the impact, which left behind a large crater dubbed Chicxulub off Mexico's Yucatan peninsula, and viewed the Deccan Traps eruptions as a minor sideshow.

Earlier this year, Richards, Renne and eight other geoscientists proposed a new scenario: that the impact ignited volcanoes around the globe, most catastrophically in India, and that the two events combined to cause the KT extinction.

In attempts to test this hypothesis, the team last year collected lava samples from throughout the Deccan Traps east of Mumbai, sampling flows from near the beginning, several hundred thousand years before the extinction and near the end, some half a million years after the extinction. High-precision argon-40/argon-39 isotope dating allowed them to establish the chronology of the flows and the rate of flow over time.

In the Science paper, they describe major changes in the Deccan Traps volcanism, which was probably "bubbling along happily, continuously and relatively slowly" before the extinction, Renne said. After the impact, the eruption rate more than doubled and the volcanism became more punctuated, with more voluminous lava flows interspersed with long periods of quiet. This is consistent with a change in the underground plumbing feeding the flows, he said: Smaller magma chambers before the impact became larger, which means they took longer to fill but spewed more lava when they did erupt.

"At the KT boundary, we see major changes in the volcanic system of the Deccan Traps, in terms of the rate at which eruptions were happening, the size of the eruptions, the volume of the eruptions and some aspects of the chemistry of the eruptions, which speaks to the actual processes by which the magmas were generated," Renne said. "All these things changed in a fundamental way, and increasingly it seems they happened right at the KT boundary. Our data don't conclusively prove that the impact caused these changes, but the connection looks increasingly clear."

Richards said that a large nearby earthquake of a magnitude 8, 9 or 10 - as large or larger than the quake that struck Japan in 2011 - could also have reignited the Deccan Trap flows. In fact, large quakes may have rattled underground magma chambers and ignited eruptions throughout Earth's history. But the simultaneous changes in the lava flows and the impact at the KT boundary seem more than mere coincidence.

"These changes are consistent with an accelerated rate of magma production and eruption that you could get from a large earthquake such as would be created by the Chicxulub impact," he said.

In 2013, Renne and his team at the Berkeley Geochronology Center and elsewhere also dated the KT boundary extinction and dust from the impact and found they occurred within less than 32,000 years of one another - the blink of an eye in geologic terms, he said. Renne's team plans to obtain isotope dates for more basalt samples from the Deccan Traps to detail the history of the lava flows that cover much of western India, in order to better understand how they changed with time and correlate to the impact and extinctions. Meanwhile, Richards is working with volcano experts to understand how large ground shaking caused by earthquakes or asteroid impacts affects volcanic eruptions.

Other co-authors of the paper are graduate student Courtney Sprain and volcanologist Steve Self of UC Berkeley; Loÿc Vanderkluysen of the Department of Biodiversity, Earth and Environmental Science at Drexel University in Philadelphia; and Kanchan Pande of the Department of Earth Sciences at the Indian Institute of Technology Bombay in Mumbai.

The dating work was supported by the Ann and Gordon Getty Foundation and UC Berkeley's Esper S. Larsen Fund. 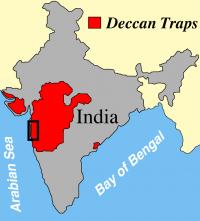 Map of Deccan Traps in India