You are what you eat is truism that has been given new impetus by 'cutting edge' research led by the University of Leicester that reveals your teeth are literally shaped by your food.

Indeed, evidence from teeth can be used to determine what has been eaten by an animal providing a new way of working out the diets of wild animals that doesn't involve the unpleasant task of looking at the contents of their guts.

Scientists say it is also possible to use these methods to investigate diets of extinct animals such as giant marine reptiles and dinosaurs.

Research led by the Department of Geology at the University of Leicester, published in the Royal Society journal Interface, shows that the roughness of tooth surfaces can reveal what an animal has been eating.

The study by an international team of palaeontologists and biologists reveals that there is a close match between roughness of teeth and diet, with teeth from animals that eat hard foods having rougher surfaces than those that eat soft foods.

Mark Purnell, Professor of Palaeobiology at the University of Leicester, said: "Run your tongue over your teeth. Some may feel rougher than others. The question we are trying to answer is can the roughness of the tips of teeth, worn by contact with food, be used to work out what an animal has been eating?

"But before we can start to answer that question, we need to ask is what is roughness? This is tricky to measure. Smooth and rough surfaces are intuitively easy to distinguish, but is tree bark rougher than a road surface? Is the microscopic surface of chalk rougher than cheese? It's hard to make the comparison.

"But the question does matter. For example, as hip replacements wear, do they get rougher or smoother? If an engine cylinder is too smooth it won't retain enough oil on its surface, leading to friction and seizing, but how smooth is too smooth? In order to answer questions like this, engineers have been working on ways to measure roughness for decades. International standards are now being developed, based on new ways of measuring surfaces very precisely using special 3-D microscopes, and it is this approach that has been applied to the teeth in this study."

The methods provide a useful new way of investigating fish diets - for example, researching how changes in diet control the disappearance of species, or the evolution of new ones - and will be especially useful in analysis of fossils, the diets of which are hard to determine.

Ole Seehausen, the team member responsible for identifying stomach contents, added: "To our surprise, we found that in some cases tooth roughness is a more reliable guide to diet than looking in a fish's stomach, because stomach contents tell you only what an animal was eating in the few hours before it was caught, not what it usually eats."

The project was funded by the Novartis Foundation and the Natural Environment Research Council.

For more information contact: Mark A. Purnell
Professor of Palaeobiology

Department of Geology
University of Leicester

throat-teeth.jpg: The strange 'throat teeth' of the cichlid fish Astatoreochromis alluaudi. The coloured images at the bottom show contoured surfaces (140 micrometers across) showing the difference in roughness between cichlids that eat hard food (right) and those that don't (left).
Image credit: Mark Purnell, University of Leicester

CichlidDent300allWH.jpg: Haplochromine cichlid fishes that eat algae in different ways have very different tooth wear. The teeth on the top row are from fish that scrape algae from plants; those in the middle row are the same species, but scrape algae from rocks. The roughest teeth, those on the bottom row, are from a species that specializes in rock scraping.
Image credit: Mark Purnell, University of Leicester

The Natural Environment Research Council (NERC) is the UK's main agency for funding and managing world-class research, training and knowledge exchange in the environmental sciences. It coordinates some of the world's most exciting research projects, tackling major issues such as climate change, environmental influences on human health, the genetic make-up of life on earth, and much more. NERC receives around £320 million a year from the government's science budget, which it uses to fund independent research and training in universities and its own research centres. www.nerc.ac.uk 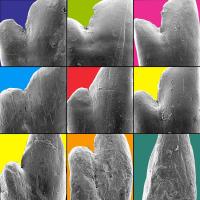