SAN FRANCISCO (February 12, 2018) - There's no sneaking by this spider. New research from the University of California Merced and the California Academy of Sciences shows that individuals from the spider family Selenopidae--commonly known as flattie spiders--can sense prey approaching from any direction and whip around in one-eighth of a second to strike. High-speed footage reveals that a swift flex of their long legs helps the hunters accomplish this feat, deemed the fastest leg-driven turn of any animal on the planet. Findings are published today in the Journal of Experimental Biology.

"Only about half of all spiders use webs to catch prey," says Dr. Sarah Crews, postdoctoral researcher at the Academy. "Some stalk and pounce, while others are sit-and-wait ambushers--like flattie spiders."

In order to document what is a seeming blur to the naked eye, Crews and lead author Dr. Yu Zeng of UC Merced set up two synchronized, high-speed video cameras above and beside the spiders. The duo then examined strike footage at speeds roughly 40 times slower than the original to map the mechanics of this novel hunting maneuver.

"We are documenting and modeling their fast spins," says Zeng, "to help chart a course for making robots and other machines more maneuverable."

What makes flattie spiders ready to spin on a dime? It's all in the legs: Their outward stance tracks parallel to the ground, allowing for a wider range of unrestricted motion. Each leg also faces a separate direction and thereby covers a different slice of their 360-degree surroundings. This means the spider can spin to orient itself toward unsuspecting prey no matter the angle of approach.

Flattie spiders keep watchful eyes out--eight to be exact--for their next victim, although it's still not known if any are actually used for seeing. Instead the spiders detect approaching prey, like hopping crickets or buzzing fruit flies, through disturbances in air current.

To simulate the ambush of these perceptive sit-and-wait predators for each trial, Crews and Zeng released a cricket and allowed it to walk freely toward the spider. The resulting strike footage revealed surprising insights.

"We found that the leg nearest the prey anchors to the ground, creating a leverage point from which the spider can pull in its torso closer to the prey," says Zeng, describing the spider's linear lunge. Legs opposite the prey push off the ground to assist. Together, this combination of pull and push also provides the beginnings of a twisting force--known as torque--that propels the spider into a swift spin.

Like figure skaters drawing their arms inward to spin faster, flattie spiders then pull their remaining legs in off the ground, holding them close. This allows the graceful hunters to spin up to 40% faster and land perfectly positioned with their mouth towards that first bite of prey.

Around the globe, flattie spiders are turning to strike their prey at speeds of up to 3,000 degrees per second. In the time it takes you to blink your eyes, these spiders--when moving full speed--can complete three full rotations. Their spin is the fastest leg-driven turning maneuver of any terrestrial animal, and also one of the fastest turns on the planet--on par with quick airborne spinners like hummingbirds and fruit flies.

Flattie spiders can be found across North and South America as well as Africa, Asia, and Australia. Crews, an expert on the Selenopidae family, searches field sites for cryptic individuals on trees and rocky surfaces--all in the dark--before bringing the nocturnal spiders back to the lab for study.

"Flattie spiders are always one step ahead in this evolutionary arms race between predator and prey," says Crews. "If the prey are positioned further away, spiders move faster both linearly and with increasing rotational speeds--there's truly no escape."

While documenting spider spins has proven record-breaking, it also has practical applications.

"Drawing inspiration from biodiversity like flattie spiders can lead to fascinating technological insights," says Zeng. The team hopes their research on the mechanics of these rotations might inform the latest multi-legged robots and other machines required to maneuver in tight, confined spaces.

"By simply observing these spiders and their natural history, we were able to make new discoveries across disciplines," adds Crews. "You just never know what path science may lead you down next--some of the best discoveries are made by accident."

Fastest spin on Earth? For animals that rely on legs, scientists say one spider takes gold 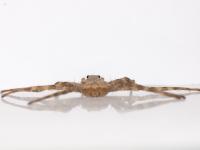 Posterior View of a Flattie Spider 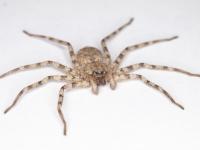