WHEN the 120m-long research vessel Polarstern is solidly frozen - quite intentionally - in the ice fields of the Arctic, a University of Huddersfield scientist will be on board.

Conditions will be austere, but Dr Byongjun (Phil) Hwang is a seasoned Arctic researcher who has already made 15 voyages to the region, observing, recording and analysing seasonal changes in the ice. The data he gathers makes an important contribution to the scientific debate over climate change.

Dr Hwang is a senior lecturer in physical geography whose Arctic expertise contributes to the curriculum of new geography degree courses at the University of Huddersfield.

He has learned that the UK Government-backed Natural Environment Research Council (NERC) has agreed to provide almost £300,000 in funding so that he can participate in the multi-national project known as MOSAiC - standing for 'Multidisciplinary drifting Observatory for the Study of Arctic Climate. The projects total cost will be over 100 million euros.

The Arctic is the region where climate change is at its fastest, with sea ice in rapid decline. There is an urgent need for new, improved methods of modelling and predicting these changes, which have an impact on weather patterns around the world.

The new overall project, which Dr Hwang will join, will be co-ordinated by Alfred-Wegener Institute. The plan is to allow the vessel Polarstern to be frozen into the Arctic in the winter of 2019 and then allow the ship to spend the next year drifting south with the ice for more than 700 miles, with teams of scientists on board.

The University of Huddersfield's Dr Hwang stresses that the Polarstern will not move under its own power. It will be carried by the ice for an average distance of about six miles a day, with the speed of the flow being more rapid in the summer.

The project takes its inspiration from an expedition of the 1890s, when the Norwegian explorer Fridtjof Nansen attempted to reach the North Pole by allowing his vessel to be frozen into the ice.

MOSAiC is the largest Arctic research expedition yet planned, and includes scientists from 16 nations, including Germany, Russia, USA, China, UK, Norway and Canada, and more than 60 institutions.

Now that his proposal to take part in MOSAiC has received NERC backing, Dr Hwang is beginning to make preparations. Setting out from a departure point in northern Europe or Russia, we will probably join Polarstern in July 2020 and remain on board for two months, having been "ferried" to the research vessel by an icebreaker, although helicopter travel might also be necessary.

He will take with him some specially-designed and constructed buoys equipped with GPS devices that are capable of tracking the movement of ice with extreme precision.

The goal of Dr Hwang and his co-investigator Dr Jinchang Ren, of the University of Strathclyde - an image processing specialist who will remain in the UK - is to investigate what is known as the marginal ice zone and the patterns which increasingly sees winter ice deforming and then breaking up in the spring and melting in the summer. It is believed that greater understanding of these seasonal ice floes can lead to better models for climate prediction.

It is important that he spends time on board the Polarstern, says Dr Hwang.

"We have satellite observation that can see what is happening alongside the ship. But if we want to measure how the individual ice is breaking up and melting, satellite cannot resolve that. In simple terms, we have to be there to go and measure it."

As a geophysicist and remote sensing expert, Korean-born Dr Hwang has developed a specialism in the dynamics and thermodynamics of snow and sea ice in polar regions. He has undertaken a large number of expeditions to the Arctic, including some tough mid-winter assignments.

Early in his career, he was based at Canadian Centre for Remote Sensing and this was followed by a decade with the Scottish Association for Marine Science, until his appointment at the University of Huddersfield. He will appoint one PhD researcher to help him work with his findings as part of the MOSAiC project. 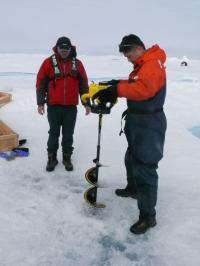