It can be challenging to develop a task setup to test inference by exclusion that can be applied in similar way to different species. One of the problems of previous studies was to exclude the possibility that animals chose a novel stimuli simply out of curiosity rather than by the exclusion of known negative stimuli. The use of the touchscreen presents a controlled setting to test cognitive capacities in animals and has already successfully been used in a number of species.

Goffin cockatoos are a highly curious Indonesian parrot species that have already proven to possess remarkable cognitive capacities. They possess high levels of 'Neophilia', which is the tendency of an individual to explore novel items and is believed to have evolved in species inhabiting islands, as there they might face fewer or no predators. In the current task, the Goffins had to learn to associate a picture with a reward that would be delivered automatically after they touched the picture on the touchscreen whereas the picture next to it would lead to no reward. During this training the unrewarded stimulus occasionally was replaced by novel, unknown stimuli. Only once the individuals chose reliably the positive stimulus over the negative or novel ones they were tested for their inference skills. This procedure ensured that the cockatoos would not choose novel pictures purely based on curiosity in the test.

In the following tests however, various combinations of novel and known pictures, which could be rewarded or unrewarded, were presented to the birds. Depending on how the individuals performed in this sequence of tests, allowed the researchers to tell apart other, strategies that may have used by the animals. "More than half of our cockatoos choose their pictures in a way that clearly indicates the ability of infer by exclusion about rewarded stimuli. However alternative strategies also play an important role in guided their choices", says Mark O'Hara who developed this task together with his colleagues.

"Considering the cockatoos capacities in previous tasks we actually expected that they would show inferences by exclusion, but this was the first test if we could detect this ability with our new task. That we could show this sort of reasoning, together with other strategies so nicely, lets us hope that the method will be applicable to many species and ultimately might help us to understand something about the evolution of this ability" he adds.

Publication in "PLoS One": 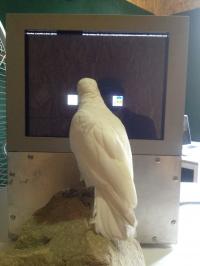