Gamma-ray bursts (GRBs) are brief and extremely powerful cosmic explosions, suddenly appearing in the sky, about once per day. They are thought to result from the collapse of massive stars or the merging of neutron stars in distant galaxies. They commence with an initial, very bright flash, called the prompt emission, with a duration ranging from a fraction of a second to hundreds of seconds. The prompt emission is accompanied by the so-called afterglow, a less brighter but longer-lasting emission over a broad range of wavelengths that fades with time. The first GRB detected by the MAGIC telescopes, known as GRB 190114C, reveals for the first time the highest energy photons measured from these objects.

This ground-breaking achievement by MAGIC provides critical new insight for understanding the physical processes at work in GRBs, which are still mysterious. The photons detected by MAGIC must originate from a process hitherto unseen in the afterglows of GRBs, clearly distinct from the physical process that is known to be responsible for their emission at lower energies. (See Side Notes for more info about GRBs, afterglows, synchrotron emission, and the MAGIC telescopes)

On January 14th, 2019, a GRB was discovered independently by two space satellites: the Neil Gehrels Swift Observatory and the Fermi Gamma-ray Space Telescope. The event was named GRB 190114C, and within 22 seconds, its coordinates in the sky were distributed as an electronic alert to astronomers worldwide, including the MAGIC Collaboration, which operates two 17m diameter Cherenkov telescopes located in La Palma, Spain. Since GRBs appear at unpredictable locations in the sky and then rapidly fade, their observation by telescopes such as MAGIC requires a dedicated follow-up strategy.

An automatic system processes in real time the GRB alerts from satellite instruments and makes the MAGIC telescopes point rapidly to the sky position of the GRB. The telescopes were designed to be very light and capable of fast repointing: despite the weight of 64 tons each, they can reach and start observing any given position in the sky in just about 25 seconds. MAGIC was able to start the observation of GRB 190114C just 50 seconds after the beginning of the GRB.

The analysis of the resulting data for the first tens of seconds reveals emission of photons in the afterglow reaching teraelectronvolt (TeV) energies, that is, a trillion times more energetic than visible light. During this time, the emission of TeV photons from GRB 190114C was 100 times more intense than the brightest known steady source at TeV energies, the Crab Nebula. In this way, GRB 190114C became the record setter as the brightest known source of TeV photons. As expected for GRB afterglows, the emission faded quickly with time, similar to the afterglow emission that had been known at lower energies. The last glimpses were seen by MAGIC half an hour later.

For the very first time, the unambiguous detection of TeV photons from a GRB was announced by the MAGIC Collaboration to the international community of astronomers just a few hours after the satellite alerts, after a careful check of the preliminary data. This facilitated an extensive campaign of multi-wavelength (MWL) follow-up observations of GRB 190114C by over two dozens of observatories and instruments, providing a full observational picture of this GRB from the radio band to TeV energies. In particular, optical observations allowed a measurement of the distance to GRB 190114C. It was found that this GRB is located in a galaxy from which it took 4.5 billion years for the light to reach the Earth.

Although TeV emission in GRB afterglows had been predicted in some theoretical studies, it had remained observationally elusive for a long time, despite numerous searches at TeV energies over the past decades with various instruments, including MAGIC. What physical mechanism is behind the production of the TeV photons finally detected by MAGIC? Antonio Stamerra, the Deputy Spokesperson of the MAGIC collaboration, points out: "These energies are much higher than what can be expected from synchrotron radiation, caused by high-energy electrons spiraling in magnetic fields. This process is understood to be responsible for the emission that had been previously observed at lower energies in GRB afterglows. These new results, together with the very comprehensive MWL data, provide the first unequivocal evidence for an additional, distinct emission process in the afterglow". Lara Nava, scientist associated with the MAGIC collaboration, adds: "From our study, the most likely origin of the TeV emission is the so-called inverse Compton process, where a population of photons are significantly kicked up in energy by colliding with high energy electrons".

"After more than 50 years since GRBs were first discovered, many of their fundamental aspects still remain mysterious", says Razmik Mirzoyan, the Spokesperson of the MAGIC Collaboration. "The discovery of gamma-ray emission from GRB 190114C in the new, TeV window of the electromagnetic spectrum shows that the GRB explosions are even more powerful than thought before. The wealth of new data on GRB 190114C acquired by MAGIC and the extensive MWL follow-up observations now offer important clues to unravel some of the mysteries concerning the physical processes at work in GRBs".

A comparative study of all previous GRB follow-ups by MAGIC suggests that GRB 190114C was not a particularly unique event except for its relative proximity (light took 4.5 billion years to reach the Earth), and that the successful detection owes to the excellent performance of the instrument. "MAGIC has opened a new window to study GRBs", says Susumu Inoue, the coordinator of the MAGIC Transients working group most involved in the project. "Our results indicate we may be able to detect many more GRBs at TeV energies. This will pave the way for a much deeper understanding of these fascinating cosmic explosions."

For any further information about MAGIC, the GRB observation and related results, the following contacts are provided:

Breaking the limits: Discovery of the highest-energy photons from a gamma-ray burst 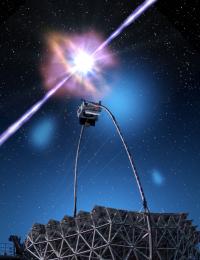