KINGSTON, R.I., -- October 20, 2020 -- For the first time, researchers have mapped the biological diversity of marine sediment, one of Earth's largest global biomes. Although marine sediment covers 70% of the Earth's surface, little was known about its global patterns of microbial diversity.

A team of researchers from the Japan Agency for Marine-Earth Science and Technology (JAMSTEC), the University of Hyogo, the University of Kochi, the University of Bremen, and the University of Rhode Island delineated the global diversity of microbes in marine sediment. For the study, published in the Proceedings of the National Academy of Sciences, Tatsuhiko Hoshino, senior researcher at JAMSTEC, and his colleagues including URI Graduate School of Oceanography Professor Steven D'Hondt analyzed 299 samples of marine sediment collected as core samples from 40 sites around the globe. Their sample depths ranged from the seafloor to 678 meters below it. To accurately determine the diversity of microbial communities, the authors extracted and sequenced DNA from each frozen sample under the same clean laboratory condition.

The 16S rRNA gene sequences (approximately 50 million sequences) obtained through comprehensive next-generation sequencing were analyzed to determine microbial community composition in each sample. From these 50 million sequences, the research team discovered nearly 40,000 different types of microorganisms in marine sediment, with diversity generally decreasing with depth. The team found that microbial community composition differs significantly between organic-rich sediment of continental margins and nutrient-poor sediment of the open ocean, and that the presence or absence of oxygen and the concentration of organic matter are major factors in determining community composition.

By comparing their results to previous studies of topsoil and seawater, the researchers discovered that each of these three global biomes--marine sediment, topsoil, and seawater--has different microbial communities but similar total diversity. "It was an unexpected discovery that microbial diversity in the dark, energy-limited world beneath the seafloor is as diverse as in Earth's surface biomes," said Hoshino.

Furthermore, by combining the estimates of bacterial and archaeal diversity for these three biomes, the researchers found that bacteria are far more diverse than archaea--microbes distinct from bacteria and known for living in extreme environments--on Earth.

This research was supported by the Japan Society for the Promotion of Science (JSPS)'s Funding Program for Next-Generation Research and Development (GR102) and the Grant-in-Aid for Scientific Research (26251041, 17H03956, 19H05503, 20K20429), the Alfred Sloan Foundation's Deep Carbon Observatory (DCO), with support from the U.S. National Science Foundation and the German Association for the Advancement of Research.

Microbial diversity below seafloor is as rich as on Earth's surface 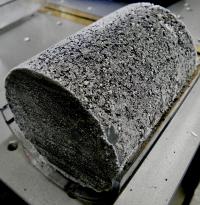