Our Sun is active: Not only does it release a constant stream of material, called the solar wind, but it also lets out occasional bursts of faster-moving material, known as coronal mass ejections, or CMEs. NASA researchers wish to improve our understanding of CMEs and how they move through space because they can interact with the magnetic field around Earth, affecting satellites, interfering with GPS signals, triggering auroras, and -- in extreme cases -- straining power grids.

While we track CMEs with a number of instruments, the sheer size of the solar system means that our observations are limited, and usually taken from a distance. However, scientists have recently used data from 10 NASA and ESA (European Space Agency) spacecraft in the direct path of a CME to piece together an unprecedented portrait of how these solar storms move through space -- in particular, narrowing down the changes in speed that happen as CMEs travel through the solar system beyond Earth's orbit. The results were published on Aug. 14, 2017 in the Journal of Geophysical Research. This new set of observations adds key information to the models needed to track how material moves and changes throughout space in the solar system -- crucial to understanding the medium through which our spacecraft travel, as we venture farther and farther from home.

On Oct. 14, 2014, a CME left the Sun, as measured by spacecraft that watch for CMEs from afar using an instrument called a coronagraph. From there, the CME washed over spacecraft throughout the inner solar system -- including passing by Curiosity on Mars, near comet 67P/Churyumov-Gerasimenko and out to Saturn. This wealth of data from directly in the path of the CME is a boon for scientists working on space science simulations. At NASA's Goddard Space Flight Center in Greenbelt, Maryland, scientists work to validate, host and improve such simulations, and this new information provides the most comprehensive look to date at how the speed of a CME evolves over time.

"If you have just one data point, you can simulate that easily, because you only have to validate that one point," said Leila Mays, a space scientist at Goddard and an author on the paper. But Mays points out that while the model may be tuned to match that one data point, it's unlikely to be accurate in the big picture. "Once you get more data, you can put together more pieces of the puzzle."

CMEs like this are common, especially when the Sun is in an active phase, as it was in 2014. This particular CME first caught scientists' interest because of its interference with another set of observations: the interaction between Comet Siding Spring and the Martian atmosphere.

"We found at the time of the comet's passing, there was some solar wind disturbance around Mars," said Olivier Witasse, a space scientist with ESA and lead author on the paper. "Which was a bit of a shame because we wanted to see the effects of the comet on the atmosphere."

Witasse and team used models from the Community Coordinated Modeling Center, or CCMC, based at NASA Goddard, to provide more context about the CME that had interfered with their measurements.

"The experimental forecasting at the CCMC made finding this CME possible," said Mays. "We were able to use our database of CMEs and throw them all into this simulation to see which were candidates for their observations."

After Witasse's team realized that comet 67P -- and therefore ESA's Rosetta spacecraft, then orbiting the comet -- was lined up to be right in the path of the CME, too, they began hunting for other observations.

"From there, it was an exciting chase to see where else the CME might have hit," said Mays. "Sometimes the impacted spacecraft's instruments weren't on, but we were able to gather other housekeeping data."

This added up to seven direct, confirmed detections of the CME. ESA's Venus Express also measured the CME indirectly, and two additional NASA spacecraft had probable detections of the CME as well -- a few months and then more than a year after it burst from the Sun. New Horizons on its way to Pluto very likely observed this same CME in January 2015, and Voyager 2 on the edge of the heliosphere may have observed it in March 2016. Because of Voyager 2's great distance from the Sun and New Horizons' lack of a magnetometer -- an instrument that measures magnetic fields -- it's not possible to say for certain if the particle changes detected by those spacecraft were caused by this particular CME.

"Once a CME travels that far from the Sun, it gets squeezed between large, merged interaction regions in the solar wind, so it's not as easy to determine exactly what's going on," said Mays.

Studying how such space weather affects the farthest regions of space, where there are fewer observatories to measure such things, remains a tantalizing area of research -- the more we know about our neighborhood, the more we can protect the technology we send out to explore our solar system. 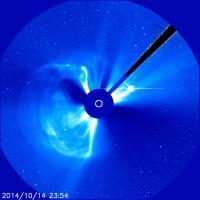