For sockeye salmon coming home after years spent at sea, a magnetic map is apparently responsible for their remarkable sense of direction. That's according to an analysis of data collected over 56 years and reported online on February 7 in Current Biology, a Cell Press publication.

"To find their way back home across thousands of kilometers of ocean, salmon imprint on the magnetic field that exists where they first enter the sea as juveniles," said Nathan Putman of Oregon State University. "Upon reaching maturity, they seek the coastal location with the same magnetic field."

Scientists had suspected that animals including fish, sea turtles, and seals might imprint on magnetic fields and use their "sixth sense" as a kind of internal GPS system. But actually asking and answering the question has been exceedingly hard to do.

In the new study, Putman and his colleagues looked to sockeye salmon from British Columbia's Fraser River. Those fish leave the river for the sea just like any other Pacific salmon, Putman said. But there's a hitch.

"When they attempt to return, they are confronted with a giant obstacle: Vancouver Island is blocking direct access to their river!" he said. "So the fish must make a choice: Do they use the northern inlet or the southern inlet in their detour?"

If the fish really do follow magnetic fields, then their choice should vary in predictable ways over the years, the researchers reasoned. That's because of something known as geomagnetic field drift. In other words, the Earth's magnetic field isn't constant; it changes gradually over time based on the chaotic movement of the Earth's liquid outer core.

And that means that fish should show a greater preference in a given year for the inlet that most closely matches the magnetic value of the Fraser River when they left it two years before. Careful comparison by the researchers of fisheries data collected since the 1950s with a model predicting the shifting magnetic field shows exactly that pattern.

The discovery may have practical application for both wild and farmed salmon.

"If you want to predict the distribution of salmon, then having information on their mechanisms of navigation is really important," Putman said, and any distortion to the magnetic field may be a problem.

"The Earth's magnetic field is quite weak compared to the magnetic fields that humans can produce," Putman added. "If, for instance, hatchery fish are incubated in conditions with lots of electrical wires and iron pipes around that distort the magnetic field, then it is conceivable that they might be worse at navigating than their wild counterparts."

That, together with tiny magnetic wires used to tag hatchery salmon, might explain the high stray rates observed in hatchery-raised fish. 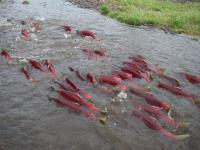