COLUMBIA, Mo. - The Cambrian Period, which occurred between 541 million and 485 million years ago, is an important point in evolutionary history where most of the major groups of animals first appear in the fossil record. Often called the "Cambrian explosion," fossils from this time provide glimpses into evolutionary history as the world's ecosystems were rapidly diversifying. Most fossils preserve the physical remains of organisms and their structure; however, geologists and paleobiologists at the University of Missouri recently collaborated to study fossils that reveal the behaviors of predators preserved as traces in ancient sediments. Thus, fossils from southeast Missouri are helping scientists unlock clues about the behaviors of these predators and their interactions with their prey. Evidence shows that these ancient organisms were behaviorally sophisticated, tailoring their attacks for effectiveness.

Trilobites are a fossil group of extinct marine invertebrate animals with external skeletons (see photo). As predators and scavengers, they flourished in the Cambrian period and were very prominent in the oceans that once were located in Missouri.

"The Saint Francois Mountains in southeastern Missouri have been the focus of geological research for decades and were once islands in the Cambrian ocean," said Kevin Shelton, professor of geological sciences in the MU College of Arts and Science. "I've worked as a geologist studying ore deposits in the area for more than 30 years. In that time, I've run across thousands of fossilized trilobite burrows. It is rare that we get to study the activities of 500 million-year-old organisms, yet the fossils in this locality are helping us determine how these organisms behaved."

The field area near the mountains is home to an abundance of trilobite trace and body fossils. James Schiffbauer and John Huntley, both assistant professors of geological sciences in the MU College of Arts and Science, worked with Shelton and Tara Selly, a graduate student in Schiffbauer's research group, to collect slabs of rocks from the site. Selly, then analyzed them in the lab at MU.

Using sophisticated three-dimensional laser scanning and digital photograph analyses, sections of the rocks revealed burrows or trails left behind by trilobites and their prey -- often worm-like creatures -- in ocean sediments. To the scientists, these intersecting trails show how the predators caught their prey. Additionally, previous studies by former MU geology professor, James Stitt, revealed that the trilobites had very large eyes, so the researchers were looking for clues as to how their anatomy played into their feeding habits.

Tracks from the site showed that the predators attacked from above, moving alongside to use their many legs for more effective grappling of their prey. Further, predators preferentially selected smaller prey, indicating that they attacked their food rather than randomly bumping into it.

"Predation, or the action of attacking one's prey, is a significant factor in evolution; this discovery is extremely important in the study of how organisms evolved in the Cambrian Period," Schiffbauer said. "In this study, we provide evidence that these trilobites were likely visual predators, displaying selectivity in seeking and hunting their food."

"Because we had an abundance of samples from the site, we were able to conduct more rigorous statistical analyses" Huntley said. "Our findings are important not only because of the large sample size, but because these early arthropods displayed such sophisticated predatory behavior."

The study, "Ichnofossil record of selective predation by Cambrian trilobites," recently was published in the journal Palaeogeography, Palaeoclimatology, Palaeoecology.

Editor's Note: For more on the story, please see: https://coas.missouri.edu/news/early-trilobite-gets-worm 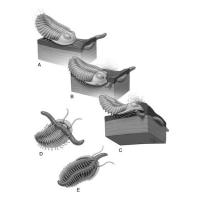 Depiction of a Trilobite Attacking a Cambrian Worm