A class of 150 US 7th graders has helped select a name for a newly discovered plant, which amazes with its fruits that appear to be bleeding once they are cut open. Bucknell University biology professor Chris Martine and life science teacher Bradley Catherman challenged the students to come up with ideas for what to call the new Australian species last spring.

Looking for a way to engage local youngsters in biodiversity science, Martine scheduled a presentation to the collective 7th grade life science classes at Donald H. Eichhorn Middle School. As the day of his assembly approached, he started to think that the best way to generate interest might be to somehow allow the students to participate in the actual research he was doing in his lab at the time. Only, he knew there were few things he could do with 150 13- and 14-year olds sitting in a gymnasium.

"I emailed Mr. Catherman and I said, 'How about we ask them to name a new species for me?' explained Martine. "And then I showed up with live plants, preserved specimens, and my notes from the Outback - and we said, 'Go ahead, tell us what to call this thing.'"

Nearly a year later, Martine and his co-authors, including two undergraduate students, have published the new species in the open access journal PhytoKeys. The news is coming just in time for the National Teacher Appreciation Day, thus giving tribute to Bradley Catherman, a life science teacher who is not afraid to step beyond the standard curriculum and make that extra step to actually engage his students with their studies.

"I was really impressed with Mr. Catherman's willingness to work outside of the typical curriculum on this," said Martine, "In an age when K-12 teachers are increasingly pressured to 'teach to the test' he is still willing to think creatively and try something unusual."

Curiously, the new flowering bush species 'behaves' nothing like an ordinary plant. While its unripened fruits are greenish white on the inside when cut open, they start 'bleeding' in no more than two minutes. The scientists have even filmed a video short showing how their insides turn bloody scarlet at first, before growing darker, appearing just like clotting blood.

A week after the presentation, each of the students submitted an essay in which they suggested a name, explained the meaning, and translated it into Latin (the language that scientific names are required to be in). Catherman and Martine then selected the two best essays for the inaugural Discovery Prize, a new middle school science award established by Martine and his wife, Rachel.

"As you might imagine, the suggestions ran the gamut from the silly to the scientific," said Martine. "But for every request to name the species after a favorite food, family pet, or Taylor Swift, there were many suggestions based on the data the students had been provided."

According to Martine, a number of the students suggested names based on two characteristics of the plant's berries: the 'bleeding' unripened fruits and the dry and bone-hard mature ones. Based on this, the plant will now be known as Solanum ossicruentum, best translated to Australian blood bone tomato, with "ossi" meaning "bone" and "cruentum" meaning "bloody". The species belongs to the genus of the tomato.

The species is native to the sub-arid tropical zone of northern Australia. Martine collected the seeds, he grew his research plants from, during a 2014 expedition to Western Australia and the Northern Territory. However, specimens of the plant had actually been gathered for years before then.

"This is just one of thousands of unnamed Australian species that have been collected by dedicated field biologists and then stored in museums," said Martine, who studied specimens of the new species in the Northern Territory Herbarium before hunting for it in the bush.

"There is a wealth of museum material just waiting to be given names - and, of course, the organisms represented by those specimens await that recognition, as well as the attention and protection that come with it."

Luckily for Solanum ossicruentum, attention and protection are not too much of an issue.

"Not only is it widespread and fairly abundant," said Martine, "but one of the healthiest populations occurs in Mirima National Park, a popular and easily-accessible natural area just outside the Western Australian town of Kununurra."

"Plus, middle schoolers can be tough to deal with. I don't think anyone in their right mind would mess with this plant, now," the botanist joked. 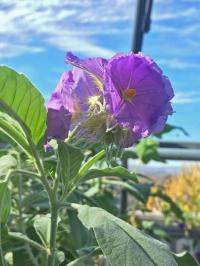 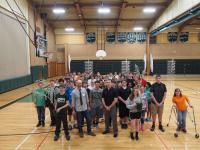