The landscape of Central Africa 65 million years ago was a low-elevation tropical belt, but the jury is still out on whether the region's mammals browsed and hunted beneath the canopy of a lush rainforest.

The scientific evidence for a tropical rainforest at that time is weak and far from convincing, says paleobotanist Bonnie F. Jacobs at Southern Methodist University in Dallas.

Fossil pollen from Central and West Africa provide no definitive evidence for communities of rainforest trees at the beginning of the Cenozoic, says Jacobs, an expert in the paleobotany of Africa soon after dinosaurs had gone extinct. It was the start of the age of mammals, and Africa was largely an island continent.

Many Cenozoic mysteries remain to be solved

The rainforest mystery is characteristic of the scientific uncertainty and unknowns surrounding Africa's ancient flora during the period called the Cenozoic. There are large gaps in the fossil record, says Jacobs, a co-author of "A Review of the Cenozoic Vegetation History of Africa." She is an associate professor in SMU's Roy M. Huffington Department of Earth Sciences.

The review, a chapter in "Cenozoic Mammals of Africa" (University of California Press, 2010), is the first of its kind since 1978 to review and interpret the Cenozoic paleobotanical record of Africa with paleogeographic maps showing paleobotanical site distributions through time. Jacobs co-authored the paper with Aaron D. Pan, a paleobotanist at the Fort Worth Museum of Science and History, and Christopher R. Scotese, in the Earth Sciences Department at the University of Texas at Arlington.

The 1008-page "Cenozoic Mammals of Africa" is the first comprehensive scientific reference of its kind since 1978, comprising 48 chapters by 64 experts. The volume summarizes and interprets the published fossil research to date of Africa's mammals, tectonics, geography, climate and flora of the past 65 million years.

Details sparse, but big picture emerges for past 65 million years

Paleobotanical data for Africa are generally meager and uneven for the Cenozoic, according to Jacobs and her co-authors.

In an original series of maps, they chart each Cenozoic Africa paleobotanical locale described in the published research to date. There are a mere 82 sites in all. Most of the sites date to 50 million years ago. Fewer date to 20 million, 30 million, 10 million and — perhaps most important — 2 million years ago, when the human family was evolving.

"Africa is disappointingly undersampled," say Jacobs and her colleagues. "This vast continent, roughly three times the area of the United States, has so far been documented by only a handful of Paleogene plant and vertebrate localities, and it has a Neogene record heavily biased toward the depositional basins of the East African Rift."

Shift from descriptive to analytic approach driven by holistic view

For a continent so important for its role in the evolution of mammals, the scarcity of plant fossil data stands in sharp contrast.

"As impressive as is the contemporary mammalian diversity of Africa, it is dwarfed by that of the Cenozoic," write the volume's editors, paleozoologist Lars Werdelin, the Swedish Museum of Natural History, and paleontologist William Joseph Sanders, the University of Michigan. Africa today represents 20 percent of the world's land mass, is the only continent to occupy both the north and south temperate zones, and is home now to more than 1,100 mammalian species, they write in the introduction.

Africa's paleobotanical record is key to a holistic understanding of ancient mammals, says H.B.S. Cooke in the preface. A mammal expert, Cooke was editor of the earlier 1978 scientific reference, "Evolution of African Mammals" (Harvard University Press).

"Most striking over the past years has been a shift in studying fossils from a largely descriptive taxonomy to a more analytical approach, including consideration of faunal associations, their distribution in time and space, and the environmental and climatic factors that prevailed and changed through time," Cooke writes in the preface to the new book. " … African prehistory has become more a study of paleobiology than mere paleontology."

To view a map or images of Cenozoic leaf fossils from Jacobs' field work in Africa go to SMU Research on flickr.

Scientific exploration to learn more about Africa's ancient vegetation is on the increase, say Jacobs and her co-authors. That should start to fill gaps in understanding, including the mystery of Africa's palms.

While palm trees are common in wet tropical forests worldwide, that's not the case in Africa today. Palm trees have not been found in abundance in Africa for the past 24 million years, regardless of whether the regional vegetation was forest, say the authors. Oddly, though, abundant palm samples have been found in some African locations dating between 65 million and 25 million years ago, including at Chilga in Ethiopia by Jacobs and Pan.

The implications of that difference are significant for the various endemic mammals of that time, many of which were absent by 23 million years ago, say the authors.

"We are fortunate that the sampling scale of most fossil localities is at the plant community level, and larger-scale changes took place one community at a time," they write. "Thus, as Africa becomes better sampled, the uneven record will ultimately become a more complete narrative of dynamic change at the community and ecosystem levels."

Funding for "Cenozoic Mammals of Africa" came from the Swedish Research Council; the University of Michigan's College of Literature, Science, and the Arts, and Museum of Paleontology; and the Regents of the University of California.

Funder
College of Literature, University of California., , Swedish Research Council, and the Arts and the Museum of Paleontology, 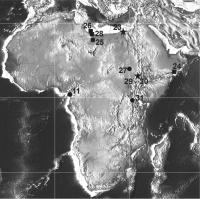 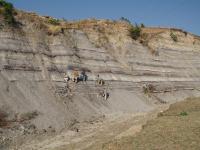