The idea that coral reefs have formed over millennia in a continuous process has been challenged by a study of the southern Great Barrier Reef. The research, led by the University of Sydney, shows that even small variations in sea level can cause significant change across the reef.

"We create a new narrative for how the Barrier Reef and other coral reefs came about and explain the importance of surprisingly small changes in sea level," said Associate Professor Jody Webster from the University of Sydney's School of Geosciences and an author on a recently published article on the findings in Geology.

"That such a minor sea level change has stalled coral reef growth and sediment production is an unexpected and significant finding."

During rising sea levels reefs grow vertically upwards until they reach sea level. Then they grow away from the reef front, producing massive amounts of sediment which gradually fill in the reef lagoon, much like filling a bucket.

"Most current models describe this infilling as a continual process, taking place over the past 6000 years or mid-Holocene, the geological era dating to the present day, following the reef reaching present sea level," said Dr Ana Vila-Concejo, also from the School and an author on the study.

"Instead our research suggests that the majority of lagoon infilling occurred for only four thousand years and was 'turned off' by a relatively small sea level fall 2000 years ago."

The researchers analysed samples from One Tree Reef in the southern Great Barrier Reef. They radiocarbon dated sediment cores from the lagoons of the coral reef to calculate sand infilling. Sea level change was calculated by dating fossil samples from micro-atolls.

"We established that starting about 6000 years ago there was 4000 years of rapid sediment production and transport until a sea level fall of between 1 to 1.3 metres. This fall coincided with a dramatic slowing of the coral reef's growth on the broadest part of the reef over the next 2000 years," said Dr Daniel Harris, the lead author on the study which he completed as a PhD student in the School of Geosciences.

Associate Professor Jody Webster said, "Our findings suggest that reefs will be sensitive to sea level changes likely to take place because of climate change, quite apart from other impacts such as ocean acidification or pollution. Based on our model higher sea level might allow for greater coral reef growth and more carbonate sediment production but that would rely on the reef systems otherwise being in good health."

Quan Hua from ANSTO, Associate Professor Yuske Yokoyama from the University of Tokyo and Professor Paula Reimer from Queen's University Belfast are contributing authors on the Geology article. 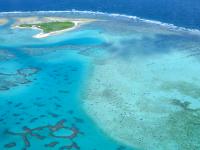