Osaka, Japan - It's one of the first questions asked by many newly-diagnosed cancer patients--"What are my chances of beating this?" Often there is no clear answer, with survival rates differing widely depending on the cancer stage and available treatment options. However, post-operative testing that provides an accurate prediction of long-term treatment outcomes is the next best thing to a crystal ball, allowing clinicians to plan further treatment or follow-up strategies and more accurately inform patients about their prognoses.

But is this possible? Researchers in Japan think that it might be, at least for esophageal cancer patients. In a recent study published in Annals of Surgery, a team led by researchers at Osaka University retrospectively examined tissue specimens from 120 esophageal cancer patients following treatment, allowing them to both assess tumor characteristics and investigate how these related to long-term treatment outcomes.

Esophageal cancer is the sixth most common cause of cancer-related death worldwide and, despite various treatment options, has a poor long-term prognosis. Most locally-advanced esophageal cancers are treated with neoadjuvant chemotherapy (NAC), which aims to increase the likelihood of successful curative surgery by reducing tumor size and eradicating systemic micro-metastases. Tissue specimens are usually examined after surgery to assess how a tumor has responded to chemotherapy treatment. However, standard methods do not map the remaining tumor cells to the different layers of the esophageal wall, and therefore provide an incomplete picture of treatment outcome.

The team hypothesized that there might be specific patterns of residual tumors after NAC, and that they might have different clinical implications for patients

The researchers therefore mapped the exact locations of residual tumors in the esophageal wall of patients after NAC and assessed whether tumor location was associated with clinicopathological parameters including specific oncological outcomes.

After NAC, they identified four tumor remnant patterns that are clearly different from those reported previously; the most common residual tumor pattern was a 'shallow type.' However, in approximately 40% of cases, tumor cells unexpectedly disappeared in the superficial (mucosal) layer of the esophageal wall, indicating that it would be difficult to diagnose whether or not tumor cells completely disappeared after NAC based only on an endoscopic mucosal biopsy. When the team examined associations between these patterns and disease factors, including prognosis, they found that pattern types 3 and 4 had higher risks of pleural dissemination and distant metastases than types 1 or 2. These results shows that patients displaying patterns 3 or 4 should have more regular follow-up appointments than those with pattern types 1 or 2. Interestingly, survival was similar among the four groups.

According to lead authors Tadayoshi Hashimoto and Tomoki Makino, these findings have significant clinical implications. They explained that by determining the tumor remnant pattern from resected specimens and post-operative image examination, a personalized treatment plan for each patient can be developed. This customized approach is expected to significantly improve esophageal cancer treatment outcomes.

The article, "The pattern of residual tumor after neoadjuvant chemotherapy for locally advanced esophageal cancer and its clinical significance", was published in Annals of Surgery at doi: https://doi.org/10.1097/SLA.0000000000003129.

Mapping residual esophageal tumors -- a glimpse into the future? 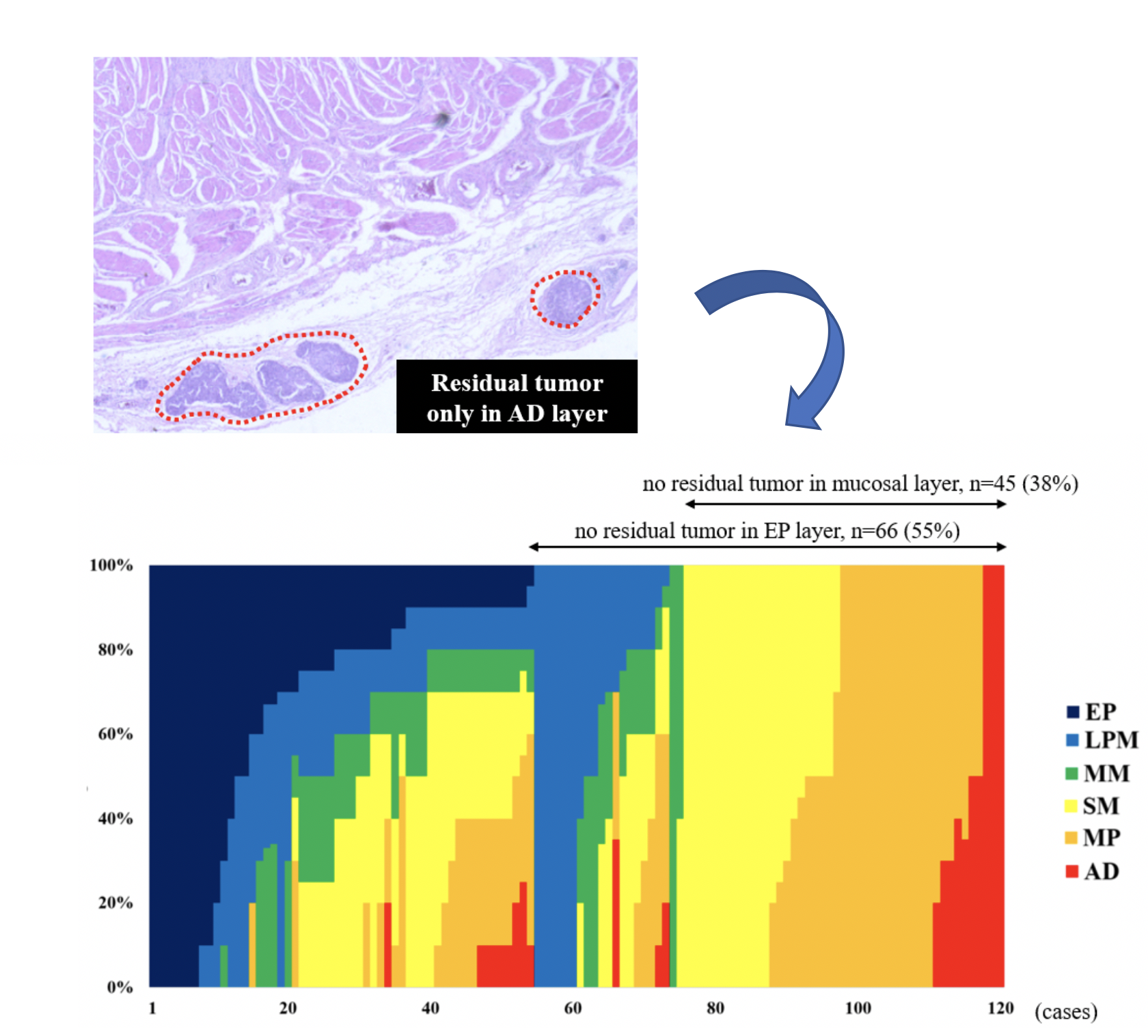