ATHENS, Ohio (March 29, 2010) — Scientists have discovered the world's smallest superconductor, a sheet of four pairs of molecules less than one nanometer wide. The Ohio University-led study, published Sunday as an advance online publication in the journal Nature Nanotechnology, provides the first evidence that nanoscale molecular superconducting wires can be fabricated, which could be used for nanoscale electronic devices and energy applications.

"Researchers have said that it's almost impossible to make nanoscale interconnects using metallic conductors because the resistance increases as the size of wire becomes smaller. The nanowires become so hot that they can melt and destruct. That issue, Joule heating, has been a major barrier for making nanoscale devices a reality," said lead author Saw-Wai Hla, an associate professor of physics and astronomy with Ohio University's Nanoscale and Quantum Phenomena Institute.

Superconducting materials have an electrical resistance of zero, and so can carry large electrical currents without power dissipation or heat generation. Superconductivity was first discovered in 1911, and until recently, was considered a macroscopic phenomenon. The current finding suggests, however, that it exists at the molecular scale, which opens up a novel route for studying this phenomenon, Hla said. Superconductors currently are used in applications ranging from supercomputers to brain imaging devices.

In the new study, which was funded by the U.S. Department of Energy, Hla's team examined synthesized molecules of a type of organic salt, (BETS)2-GaCl4, placed on a surface of silver. Using scanning tunneling spectroscopy, the scientists observed superconductivity in molecular chains of various lengths. For chains below 50 nanometers in length, superconductivity decreased as the chains became shorter. However, the researchers were still able to observe the phenomenon in chains as small as four pairs of molecules, or 3.5 nanometers in length.

"But we've opened up a new way to understand this phenomenon, which could lead to new materials that could be engineered to work at higher temperatures," he said.

The study also is noteworthy for providing evidence that superconducting organic salts can grow on a substrate material.

Collaborators on the paper include Kandal Clark, a doctoral student in the Russ College of Engineering and Technology at Ohio University; Sajida Khan, a graduate student in the Department of Physics and Astronomy at Ohio University; Abdou Hassanien, a researcher with the Nanotechnology Research Institute, Advanced Industrial Science and Technology (AIST) and the Japan Science and Technology Agency's Core Research of Evolutional Science & Technology (JST-CREST) in Japan who conducted the work as a visiting scientist at Ohio University; Hisashi Tanaka, a scientist at AIST and JST-CREST who synthesized the molecules; and Kai-Felix Braun, a scientist with the Physikalisch Technische Bundesanstalt in Braunschweig, Germany, who conducted the calculations at the Ohio Supercomputing Center.

Note to media: Please contact sources for related scientific images of the superconductor. 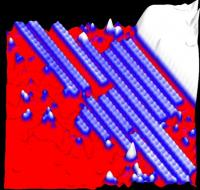