Chlorinated chemicals perform a host of societally useful functions, but they also have a dark side. Once their use life has ended, such agents often become environmental contaminants, sometimes resistant to bioremediation.

The research was conducted as part of her doctorate work under the guidance of associate professor Rosa Krajmalnik-Brown at Biodesign's Swette Center for Environmental Biotechnology. Results of the most recent of three studies appear in the current, advanced online edition of the journal PLOS ONE.

The new studies explore the metabolic activities of a group of microbes known as Dehalococcoides, and propose strategies to improve their effectiveness for environmental cleanup projects involving chlorinated chemicals.

"Dehalococcoides have been officially on the scientific map since 1997," Delgado says, noting that they remain the only microorganisms of their kind, and therefore of great importance for bioremediation. "In close to 20 years we have not discovered other bacteria that can perform reductive dechlorination of chemicals like TCE all the way to ethene."

Trichloroethene – focus of the current studies – is one of the most ubiquitous chlorinated chemicals. Approximately 60 percent of the U.S. National Priorities List Superfund sites and roughly 20 percent of the national groundwater sources are contaminated with chlorinated solvents, such as TCE. TCE is a sweet-smelling, non-flammable liquid halocarbon that was widely used in the past century because of its properties as an effective industrial solvent, with applications ranging from dry cleaning to the cleaning and degreasing of an enormous range of metal and other components.

TCE produces many undesirable health side effects. The most alarming hazard associated with TCE exposure is cancer. In 2011, the United States Environmental Protection Agency revised its Final Health Assessment for Trichloroethylene, formally identifying TCE as a human carcinogen.

Improper disposal of TCE (and related chlorinated chemicals) is a major threat to human health and water sources due to the volume of these chemicals that have found their way into the environment, the resulting carcinogenic hazard and the significant challenges involved in cleanup.

Enter Dehalococcoides mccartyi, a group of anaerobic bacteria whose unique metabolic processes allow them to grow and thrive, using TCE as part of their respiratory machinery.

"They use these chlorinated solvents as their electron acceptor, which means they respire them," Krajmalnik-Brown says. "It's like their oxygen." (Just what Dehalococcoides was living on before the introduction of TCE remains an unresolved puzzle.)

Dehalococcoides have become an invaluable tool for the bioremediation of sites contaminated with TCE because they can convert the hazardous chemical first into cis-dichlroethene (cis-DCE), then to vinyl chloride, intermediary chlorinated byproducts, and finally into ethene, an environmentally benign, non-chlorinated end-product. As Krajmalnik-Brown notes "to date, every time we see a site where ethene is being produced, Dehalococcoides are present."

There's one problem, however. In some cases, Dehalococcoides fail to complete the transformation of TCE into ethene, stalling at the mid-stage reaction and sequentially producing two chemicals: cis-DCE and vinyl chloride. The latter is a human carcinogen and of grave concern in the environment, as it can disperse more readily than the original TCE.

The primary focus of the PLOS ONE study was to determine the nature of this stalling during the TCE-to-ethene reaction. Earlier studies had proposed that Dehalococcoides at a given bioremediation site lacked the necessary machinery required to complete the full breakdown of TCE into ethene. An alternate explanation suggested that Dehalococcoides was somehow inhibited during the process.

Delgado's work points to another explanation and a plausible means for rectifying the stalling problem. Dehalococcoides require hydrogen (H2) as an electron donor for their respiratory cycle. The current experiments proved that in some cases, Dehalococcoides are out-competed for hydrogen by a variety of other microorganisms present in the soil or sediment.

Samples of soil and sediment from three sites (Romania, Puerto Rico and South Carolina) were examined. The first two samples were uncontaminated while the third was extracted from a military base in Parris Island, South Carolina – a site contaminated with PCE, a chlorinated chemical similar to TCE.

All three samples were used in microcosm studies where general environmental conditions of a given site are replicated in a sample bottle and remediation effects can be acutely analyzed. The studies demonstrated that sites bearing wide microbial diversity (such as the uncontaminated Romanian and Puerto Rican samples) contained large numbers of bacteria capable of out-competing Dehalococcoides for essential hydrogen, thereby causing the breakdown of chlorinated chemicals to stall at the cis-DCE phase.

In the case of the contaminated sample from South Carolina, Dehalococcoides was successful in the full reduction of chlorinated chemical to ethene. The authors speculate that the toxic contaminant in the sediment likely acted to limit microbial diversity, allowing Dehalococcoides better access to hydrogen.

In the Romanian and Puerto Rican soil samples, conditions for Dehalococcoides to thrive were created by removing the soil with the competing microbes and their respective electron acceptors (presumably present in the solid phase). Thus, the mid-stage stalling was overcome and the reaction from TCE to ethene was successful. The same outcome was also obtained by enriching microcosms with additional Dehalococcoides from a mixed microbial culture.

A further discovery of the new research is that carbonate minerals naturally present in water and soil act as electron acceptors for competing microbes like methanogens and acetogens, helping them grow and outcompete Dehalococcoides for hydrogen. This was also systematically demonstrated in Delgado's previous study. Limiting the addition of carbonates (commonly used to raise the aquifer pH) in contaminated sites should also enhance the ability of Dehalococcoides to fully reduce TCE to ethene.

Delgado and her colleagues used the knowledge gathered in these two studies to grow biodegrading cultures in continuous bioreactor experiments, demonstrating that Dehalococcoides could be grown at high density and perform reductive dechlorination at faster rates under conditions where bicarbonate was finely adjusted to optimum values, depriving competitors (paper). Currently, Delgado and Krajmalnik-Brown are contacting bioremediation companies to test these optimized Dehalococcoides-containing cultures at contaminated sites.

"One of the implications of this study that we consider important is understanding your contaminated site – linking the chemistry and microbiology from the very beginning is very important," Delgado says. The stakes for human health are enormous, as effective cleanup of innumerable sites around the world contaminated with chlorinated chemicals remains a daunting societal challenge.

Managing specialized microbes to clean stubborn chemicals from the environment 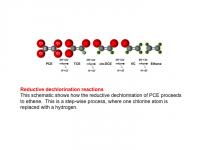 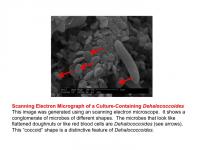