Renewable energy targets and other support policies now in place in 164 countries powered the growth of solar, wind and other green technologies to record-breaking energy generation capacity in 2014.

With 135 gigawatts added, total installed renewable energy power capacity worldwide, including large hydroelectric plants, stood at 1712 gigawatts, up 8.5% from the year before and double the 800 gigawatts of capacity reported in the first REN21 report in 2005.

In 2014, renewables made up an estimated 59% of net additions to global power capacity and represented far higher shares of capacity added in several countries around the world. By year's end, renewables comprised an estimated 27.7% of the world's power generating capacity. This was enough to supply an estimated 22.8% of global electricity demand.

The quantity of electricity available from renewables worldwide is now greater than that produced by all coal-burning plants in the USA (in 2013 coal supplied ~38% of US electricity, down from ~50% in the early 2000s).

All of which helped the world achieve a sustainable development milestone: In 2014, for the first time in four decades, the world economy grew without a parallel rise in carbon dioxide emissions. Despite the world's annual 1.5% increase in energy consumption in recent years and 3% Gross Domestic Product growth last year, CO2 emissions were unchanged from 2013 levels: 32.3 billion metric tons.

According to the report, the landmark "decoupling" of economic and CO2 growth is due in large measure to China's increased use of renewable resources, and efforts by countries in the Organisation for Economic Co-operation and Development to promote sustainable energy sources.

This is "particularly encouraging," the report says, given the UN's major conference in December in Paris, where countries will announce and / or confirm actions to mitigate climate change, setting the stage for future investment in renewables and energy efficiency. "Renewable energy and improved energy efficiency are key to limiting global warming to two degrees Celsius and avoiding dangerous climate change", says REN21 Chair Arthouros Zervos, who released the new report at the Vienna Energy Forum.

Employment in the sector is growing fast as well. In 2014, an estimated 7.7 million people worldwide worked directly or indirectly in the renewable energy sector

The sector's growth could even greater if not for government policies, including more than $550 billion in annual subsidies for fossil fuel and nuclear energy, which perpetuate artificially low energy prices from those sources, encouraging waste and impeding competition from renewables.

Says Christine Lins, Executive Secretary, REN21: "Creating a level playing field would strengthen the development and use of energy efficiency and renewable energy technologies. Removing fossil-fuel and hidden nuclear subsidies globally would make it evident that renewables are the cheapest energy option."

More than one billion people, or 15% of humanity, still lack access to electricity. With installed capacity of roughly 147 GW, all of Africa has less power generation capacity than Germany. Distributed renewable energy technologies are improving the situation, providing essential and productive energy services in remote and rural areas. For example, off-grid solar PV (which attracted roughly US $64 billion in 2014) has a significant and growing market presence.

However, the growth rate is below that necessary to achieve the Sustainable Energy for All (SE4ALL) goals of doubling renewable energy and energy efficiency and providing universal access for all by 2030.

Available publicly from June 18 (at http://www.ren21.net/gsr), REN21's Renewables Global Status Report is the 10th annual edition of the world's most frequently-referenced report on the global green energy market, industry and policy landscape.

Investment in developing countries was up 36% from the previous year to US$ 131.3 billion. Developing country investment came the closest ever to surpassing the investment total for developed economies, which reached US$ 138.9 billion in 2014, up only 3% from 2013.

China accounted for 63% of developing country investment, while Chile, Indonesia, Kenya, Mexico, South Africa and Turkey each invested more than US$ 1 billion in renewable energy.

Over 51 GW of wind capacity was added, representing a 44% increase over 2013 and raising the world total to around 370 GW. China alone accounted for 45% of global additions. Asia remained the largest market for the seventh consecutive year, and overtook Europe in total capacity. However, Europe saw its second highest installations ever, largely thanks to Germany. The United States was the leading country for wind power generation.

Wind power met more than 20% of electricity demand in several countries--including Denmark, Nicaragua, Portugal, and Spain. An estimated 1.7 GW of grid-connected capacity was added offshore-- all in the United Kingdom, Germany, Belgium, and China -- bringing the world total to more than 8.5 GW.

Liquid biofuel production was up 9% in 2014, reaching its highest level to date. Although the United States and Brazil dominated overall volume, Asia experienced particularly high growth rates of production. Biofuels production also increased in Europe, although growth was slowed by the decision to limiting the contribution of first generation biofuels to EU national targets. Low oil prices in the second half of the year positively affected some feedstock production, but reduced turnover for some bioenergy businesses.

Trade patterns in both solid and liquid fuels saw some shifts in 2014, with a considerable share of North American wood pellets flowing to Asia, reducing the domination of flows to European markets. The share of traded biofuels destined for Europe continued to decline, while new markets (particularly for fuel ethanol) expanded in other regions.

Available publicly from June 18 (at: http://www.ren21.net/gsr), REN21's Renewables Global Status Report is the 10th annual edition of the world's most frequently-referenced report on the global green energy market, industry and policy landscape. It is the collaborative result of collaboration of over 500 experts from all around the world. Country information for 133 countries were received and used as basis for GSR2015 preparation. The country data received is featured in the newly launched REN21 Renewables Interactive Map. 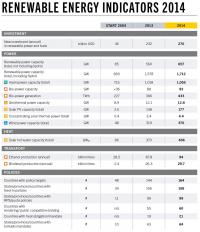