Neurons in a brain region called the medial temporal lobe play a key role in our ability to quickly form memories about real-life events and experiences, according to a study published July 1st in Neuron. By recording from individual neurons in patients, the researchers reveal for the first time in humans the single-cell basis for the creation of episodic memories.

"It was impressive to see how individual neurons signalled the learning of new contextual associations between people and places and that the changes in firing could occur just after one instance," says lead study author Matias Ison of the University of Leicester. "This was also compatible with basic mechanisms underlying episodic memory formation."

The creation of memories about real-life episodes requires rapid neuronal changes that may appear after a single occurrence of an event. Previous studies in animals have shown that the medial temporal lobe is involved in encoding associations, which is necessary for the formation of episodic memories. However, these studies were limited because they required extensive reward-based training and typically involved numerous repetitions of non-natural stimuli, leaving it unclear how individual neurons enable the rapid encoding of episodic memories in natural contexts. Meanwhile, studies in humans have shown that neurons in the medial temporal lobe respond to related concepts, such as Jennifer Aniston and Lisa Kudrow from the television show "Friends." But to date, human studies had not revealed the single-neuron underpinnings of episodic memory formation.

To address this question, Ison teamed up with senior study authors Rodrigo Quian Quiroga of the University of Leicester and Itzhak Fried of the University of California, Los Angeles, to record the activity of more than 600 individual neurons using electrodes implanted in the medial temporal lobe of 14 epileptic patients with severe epilepsy. The electrodes were implanted to identify the seizure focus for potential surgical cure. In the first phase of the experiment, the patients viewed pictures of people, such as family members and famous actors and athletes, and places, such as the Eiffel Tower and the White House. Then they saw composite images that each contained a previously viewed person and landmark to mimic the experience of meeting an individual at a particular place.

After a single exposure to the composite images, the patients learned the associations between each person and place, such as Clint Eastwood placed in front of the Leaning Tower of Pisa. Medial temporal lobe neurons that selectively responded to Clint Eastwood but not the Tower of Pisa in the first phase of the experiment abruptly began firing to this famous landmark once the patient learned the association. Conversely, neurons that were originally activated by the Tower of Pisa but not by the picture of Eastwood began to respond strongly to the actor as soon as learning occurred. A large proportion of visually responsive neurons in the medial temporal lobe expanded their selectivity to encode these specific associations within a few trials.

"The astonishing fact was that these changes were dramatic, occurring at the exact moment of learning, even after one trial," Ison says. "The emergence of associations between concepts after a single trial, linked to rapid neural activity changes, turned out to be ideal for the creation of new episodic memories."

The researchers will next examine why certain related concepts are consolidated into long-term memories while others are forgotten, and whether it is possible to later retrieve these learned associations by stimulating the brain. "The loss of memory function is one of the most devastating afflictions of the human condition," Fried says. "The present study looking at the basic underpinning of the inception of associations is an important step in understanding the physiological basis required for the development of novel interfaces with the human brain, which may one day improve the lives of neurological patients with memory impairment, such as in Alzheimer's disease, traumatic brain injury, or epilepsy."

Neuron, published by Cell Press, is a bimonthly journal that has established itself as one of the most influential and relied upon journals in the field of neuroscience and one of the premier intellectual forums of the neuroscience community. It publishes interdisciplinary articles that integrate biophysical, cellular, developmental, and molecular approaches with a systems approach to sensory, motor, and higher-order cognitive functions. For more information, please visit http://www.cell.com/neuron. To receive media alerts for Neuron or other Cell Press journals, please contact press@cell.com.

New insights into how the brain forms memories 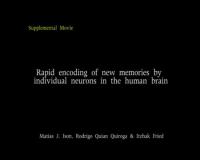