Osaka, Japan--The transition of unstructured amorphous materials into structured crystalline materials is generally induced by heating materials above their transition temperature. Crystalline materials are important in technology like devices, so alternative ways to control their formation has attracted much interest from materials scientists. Researchers have found that crystallization can be facilitated at a lower temperature than the traditional transition temperature if an amorphous material is agitated at a certain frequency. Thus, agitation represents a possible alternative to temperature for controlling the crystallization of materials.

A team at Osaka University decided to clarify the relationship between the agitation and crystallization of amorphous solids. To aid their investigation, they used a colloidal (small particle) system to model atomic materials because the larger particle size and relaxation time of colloids, compared with those of atoms, facilitate their measurement.

"We prepared colloidal glasses from silica spheres in solution and then oscillated them at different frequencies," explains first author Nobutomo Nakamura. "We then observed the resulting structure by confocal laser scanning microscopy."

"Our results indicated there is a specific vibrational mode that facilitates crystallization of the colloid," says Nakamura.

These findings reveal that it may be possible to control the crystallization of amorphous systems by agitation at a specific frequency rather than heating above their transition temperature. This may allow the formation of crystalline materials at a lower temperature, which will be useful in device manufacturing.

Control of material crystallization by agitation 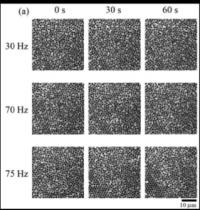