TEMPE, Ariz. – "What has six legs and is way cooler than a spider?" asks a riddle on the cover of a birthday card sent to Stephen Colbert by entomologists Quentin Wheeler at Arizona State University and Kelly Miller at the University of New Mexico.

The answer – Agaporomorphus colberti – is a diving beetle from Venezuela named by Wheeler and Miller to honor Colbert, the satirical host and executive producer of Comedy Central's "The Colbert Report."

Knowing Colbert's fondness for recognition (there's his popular segment on the show: "Who's Not Honoring Me Now") and for presents, the scientists sent the political satirist a framed print of the beetle as a birthday gift to mark his 45th birthday on May 13.

"Last year, Stephen shamelessly asked the science community to name something cooler than a spider to honor him. His top choices were a giant ant or a laser lion. While those would be cool species to discover, our research involves beetles, and they are 'way cooler' than a spider any day," Wheeler says.

Wheeler and Miller are no strangers to shameless promotion, especially when it comes to shining attention on biodiversity and the field of taxonomy. The pair have named beetles to honor the late rock 'n' roll legend Roy Orbison and his widow Barbara (Orectochilus orbisonorum); for fictional "Star Wars" character Darth Vader (Agathidium vaderi); and for former President George W. Bush, former Vice President Dick Cheney, and former Secretary of Defense Donald Rumsfeld (Agathidium bushi, A. cheneyi and A. rumsfeldi).

Wheeler is director of the International Institute for Species Exploration at Arizona State University, in addition to being a university vice president, dean of ASU's College of Liberal Arts and Sciences, and a professor in the School of Life Sciences.

Miller, a former student of Wheeler, is an assistant professor of biology at the University of New Mexico and curator of arthropods at UNM's Museum of Southwestern Biology.

What makes beetles cooler than spiders? Their strength in numbers – they dominate other groups of species. Taxonomists believe there are roughly 500,000 named species in the scientific order Coleoptera (beetles) and probably three times that many waiting to be discovered – an amount that far exceeds the number of species in any other group of plant or animal.

The beetle named for Colbert – Agaporomorphus colberti – belongs to a species group (A. knischi Zimmerman) based on the common presence of a pair of rows of fine setae on the dorsal surface of the male's reproductive organs.

There are about 1.8 million species that have been described since Carolus Linnaeus initiated the modern systems for naming plants and animals in the 18th century. Scientists estimate there are between 2 million and 100 million species on Earth, though most put that number closer to 10 million. Even with some 20,000 new species discovered each year, there are many that will go out of existence before being studied.

"Charting the species of the world and their unique attributes are essential parts of understanding the history of life," Wheeler says. "It is our own self-interest as we face the challenges of living on a rapidly changing planet."

That urgency is shared by Miller and others, including Harvard biologist and conservationist E.O. Wilson, in their quest to draw attention to biodiversity.

"In a time when new planets are being found around other stars and people are wondering whether life exists elsewhere in the universe, many people aren't aware of how much is not known about life on our own planet," says Miller. "Opportunities like this help boost awareness of the vast diversity that remains undiscovered on Earth, and of taxonomy, the science that seeks to discover it."

Wheeler adds: "Naming a beetle for Stephen Colbert is in sync with the institute's goal to popularize science."

As another part of its public awareness campaign, the International Institute for Species Exploration at Arizona State University annually unveils the top 10 new species described in the previous year. The list of top 10 new species from 2008 will be announced May 23, a date that coincides with the birth of Linnaeus.

The top 10 new species are selected by an international committee of taxonomists – scientists responsible for species exploration and classification. Last year's list is at: http://species.asu.edu.

On May 23, the institute also will release the State of Observed Species (SOS) Report on human knowledge of Earth's species, summarizing the number of species newly described in the most recent year for which complete data are available. 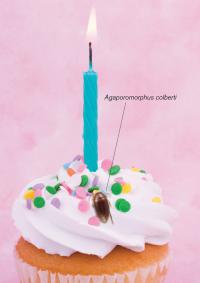