The world's smallest species of snake, with adults averaging just under four inches in length, has been identified on the Caribbean island of Barbados. The species -- which is as thin as a spaghetti noodle and small enough to rest comfortably on a U.S. quarter --was discovered by Blair Hedges, an evolutionary biologist at Penn State. Hedges and his colleagues also are the discoverers of the world's smallest frog and lizard species, which too were found on Caribbean islands. The most recent discovery will be published on 4 August 2008 in the journal Zootaxa.

Hedges found the new snake -- a type of threadsnake -- in a tiny forest fragment on the eastern side of Barbados. He believes the species is rare because most of its potential habitat has been replaced by buildings and farms. "Habitat destruction is a major threat to biodiversity throughout the world," he said. "The Caribbean is particularly vulnerable because it contains an unusually high percentage of endangered species and, because these animals live on islands, they have nowhere to go when they lose their habitat."

Hedges determined that the Barbados species is new to science on the basis of its genetic differences from other snake species and its unique color pattern and scales. He also determined that some old museum specimens that had been misidentified by other scientists actually belong to this new species.

Scientists use adults to compare sizes among animals because the sizes of adults do not vary as much as the sizes of juveniles and because juveniles can be harder to find. In addition, scientists seek to measure both males and females of a species to determine its average size. Using these methods, Hedges determined that this species, which he named Leptotyphlops carlae, is the smallest of the more than 3,100 known snake species.

According to Hedges, the smallest and largest species of animals tend to be found on islands, where species can evolve over time to fill ecological niches in habitats that are unoccupied by other organisms. Those vacant niches exist because some types of organisms, by chance, never make it to the islands. For example, if a species of centipede is missing from an island, a snake might evolve into a very small species to "fill" the missing centipede's ecological niche.

Hedges thinks the Barbados snake may be at or near the minimum possible size for snakes, though he cannot say for sure that no smaller species exists -- several other snake species are nearly as small. While it is possible that a smaller species exists, finding such an animal is unlikely. "Snakes may be prevented by natural selection from becoming too small because, below a certain size, there may be nothing for their young to eat," said Hedges, adding that the Barbados snake, like others to which it is related, likely feeds primarily on the larvae of ants and termites.

In contrast to larger species -- some of which can lay up to 100 eggs in a single clutch -- the smallest snakes, and the smallest of other types of animals, usually lay only one egg or give birth to one offspring. Furthermore, the smallest animals have young that are proportionately enormous relative to the adults. For example, the hatchlings of the smallest snakes are one-half the length of an adult, whereas the hatchlings of the largest snakes are only one-tenth the length of an adult. The Barbados snake is no exception to this pattern. It produces a single slender egg that occupies a significant portion of the mother's body.

"If a tiny snake were to have two offspring, each egg could occupy only half the space that is devoted to reproduction within its body. But then each of the two hatchlings would be half the normal size, perhaps too small to function as a snake or in the environment," said Hedges. "The fact that tiny snakes produce only one massive egg -- relative to the size of the mother -- suggests that natural selection is trying to keep the size of hatchlings above a critical limit in order to survive."

Hedges has discovered and described more than 65 new species of amphibians and reptiles throughout the Caribbean in the course of his genetic and evolutionary studies. In the paper in which he describes the Leptotyphlops carlae snake that he discovered on Barbados, he also describes another new snake that he discovered on the nearby island of St. Lucia, a new threadsnake that is nearly as small as the Barbados snake. Finding new species, collecting them, and naming them is a necessary first step for other types of research. Hedges said this exploration and discovery of new species also is critical for protecting biodiversity. "It is difficult to protect a species if you don't know it exists," he said.

Funding for the research to be published in Zootaxa was provided by the National Science Foundation and the National Aeronautics and Space Administration.

High-resolution images related to this story are on the Web at: http://www.science.psu.edu/alert/Hedges7-2008.htm . 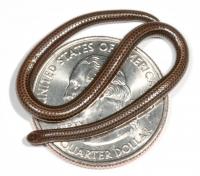