GRAND RAPIDS, Mich. (June 24, 2021) -- The same taste-sensing molecule that helps you enjoy a meal from your favorite restaurant may one day lead to improved ways to treat diabetes and other metabolic and immune diseases.

TRPM5 is a specialized protein that is concentrated in the taste buds, where it helps relay messages to and from cells. It has long been of interest to researchers due to its roles in taste perception and blood sugar regulation.

Now, a team led by scientists at Van Andel Institute has published the first-ever high-resolution images of TRPM5, which reveal two areas that may serve as targets for new medications. The structures also may aid in the development of low-calorie alternative sweeteners that mimic sugar. The findings were published today in Nature Structural and Molecular Biology.

"TRPM5 is the cornerstone of taste signaling, which itself has a much larger role in the body than often recognized," said Wei Lü, Ph.D., an associate professor at VAI and co-corresponding author of the study. "We hope our structures of TRPM5 will serve as blueprints for designing new medications that help control blood sugar in diabetes, while also providing a template for development of low-calorie sweeteners that activate sensory circuits in the brain and the gut -- a key distinction that mimics sugar."

There are five types of taste that the body senses: sweet, sour, salty, bitter and umami. When the tongue encounters a taste, specialized cells on the tongue called taste receptors send messages about that taste to the brain. TRPM5 is a key part of the complex process that ushers these important signals on their way to the brain's sensory processing center.

But taste perception goes far beyond helping us sense the subtle flavors of a tiramisu. It helps protect the body by detecting bitter and acidic tastes, which commonly are associated with harmful substances. Taste perception also occurs beyond the tongue; for example, the process of taste perception in certain pancreatic cells regulates insulin secretion, which keeps blood sugar levels in check. Similar cells, called tuft cells, also coat the linings of the intestine, lungs and gallbladder, where they use TRPM5 and related proteins to sense the sugar-like byproducts of parasitic infections and trigger immune responses to deal with the threat.

"Targeting TRPM5 and taste-signaling throughout the body has two major potential benefits: it may help us improve treatment for a number of metabolic and immune disorders while also providing a path toward improved sweeteners," said Juan Du, Ph.D., an associate professor at VAI and co-corresponding author of the study. "While the body needs sugar to survive, too much of it can be harmful. We're hopeful a more thorough understanding of TRPM5 will lead to better alternatives."

TRPM5 belongs to the TRP superfamily, a group of proteins that mediate responses to sensory stimuli, such as pain, pressure, vision, temperature and taste. Broadly known as ion channels, proteins like TRP nestle within cells' membranes, acting as gatekeepers for chemical signals passing into and out of the cell. The eight proteins that comprise the TRPM subfamily are part of this broader group.

To date, Lü and Du laboratories have solved the structures of three of the eight known TRPM proteins as well as an ion channel called CALHM2, which belongs to the calcium homeostasis modulator family. Another member of this molecular family is CALHM1, also an important component of taste signaling.

Research reported in this publication was supported by Van Andel Institute; the National Heart, Lung, and Blood Institute of the National Institutes of Health under award no. R56HL144929 (Lü) and R01HL153219 (Lü); a McKnight Scholar Award (Du); a Klingenstein-Simons Scholar Award (Du); a Sloan Research Fellowship in neuroscience (Du); and a Pew Scholars in Biomedical Research Award from the Pew Charitable Trusts (Du). The content is solely the responsibility of the authors and does not necessarily represent the official views of the National Institutes of Health or other granting organizations. 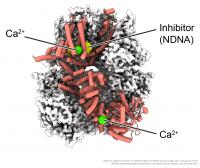