This press release is available in French.

Some of the first data collected by the CoRoT space telescope mission, launched in December 2006, provides valuable information about the physical vibrations and surface characteristics of nearby stars that are similar to our Sun, researchers say. This novel information illustrates the great value of space-based observations, and provides astronomers with insights into the interior of our Sun, other stars, and the overall evolution of our galaxy.

The related report will be published by the journal Science on Friday, 24 October, and featured on the cover. Science is the journal of AAAS, the nonprofit science society.

Dr. Eric Michel from the Observatory of Paris-LESIA-CNRS and a large group of colleagues from across Europe and South America analyzed the data from the CoRoT satellite to determine that three nearby stars, all significantly hotter than the Sun, also have larger vibrations, or oscillations, and much finer surface texture, or granulation. With this unprecedented data, the researchers show that the stars' oscillations are about 1.5 times as vigorous as the Sun's, and their granulation is about three times finer. The observed oscillations, though much more intense than the Sun's, are still about 25% weaker than most models predicted.

These landmark results represent the first time researchers have been able to accurately gauge the oscillation amplitudes and granulation signatures of solar bodies in our universe, other than the Sun.

The initial discovery of oscillations in our Sun in the late 1970's led to the creation of "solar seismology," which has since been used to measure the movement and transport of heat around the Sun. Solar seismology led to rapid progress in understanding the Sun's internal structure, but eventually researchers hit a wall. Accurate measurements of solar-like oscillations require the collection of precise data from long, uninterrupted sequences of observations, making ground-based study impossible.

"Although the energy from the Sun is more or less constant over our lifetimes, even very small variability in its output can have important effects," says Brooks Hanson, deputy editor for physical sciences at Science Magazine. "Understanding that small variability is critical, for example, in predicting solar storms and space weather, and for resolving the causes of changes in Earth's climate… These observations [by Michel and colleagues], and more in the future, will provide the essential data for improving our understanding of the interior of the Sun, and stars in general."

The findings presented by Michel and colleagues are based on light curves obtained with the CoRoT satellite over a period of 60 days, and help to refine our understanding of stars and the Sun. These results "allow us to place our Sun within the bigger picture of the evolution of our galaxy and the local universe," says Ian Osborne, senior editor of Science Magazine.

The American Association for the Advancement of Science (AAAS) is the world's largest general scientific society, and publisher of the journal Science (www.sciencemag.org). AAAS was founded in 1848, and serves 262 affiliated societies and academies of science, reaching 10 million individuals. Science has the largest paid circulation of any peer-reviewed general science journal in the world, with an estimated total readership of 1 million. The nonprofit AAAS (www.aaas.org) is open to all and fulfills its mission to "advance science and serve society" through initiatives in science policy; international programs; science education; and more. For the latest research news, log onto EurekAlert!, www.eurekalert.org, the premier science-news Web site, a service of AAAS.

The good vibrations of nearby stars 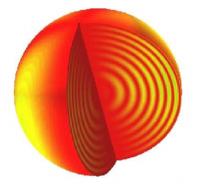 The Good Vibrations of Nearby Stars (2 of 3) 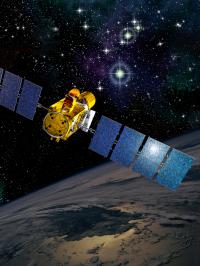 The Good Vibrations of Nearby Stars (3 of 3)