Scientists at the University of Leicester are using an unusual resource to investigate ancient climates– prehistoric animal urine.

The animal in question is the rock hyrax, a common species in countries such as Namibia and Botswana. They look like large guinea pigs but are actually related to the elephant. Hyraxes use specific locations as communal toilets, some of which have been used by generations of animals for thousands of years. The urine crystallises and builds up in stratified accumulations known as 'middens', providing a previously untapped resource for studying long-term climate change.

Funding from the Leverhulme Trust and, more recently, the European Research Council has allowed the Leicester group to join an international team led by Dr Brian Chase, from the Institut des Sciences de l'Evolution de Montpellier, to study these unique deposits. With Dr Chase, Drs Andrew Carr and Arnoud Boom from the University of Leicester's Department of Geography are engaged in exploring novel records of past environmental change preserved within the middens.

Their work has recently been published in the journals "Quaternary Research", "Palaeogeography Palaeoclimatology Palaeoecology" and "Geology".

"In order to study past environmental changes scientists typically acquire samples from deposits laid down in bogs or lakes, within which organic matter, which can be dated is preserved," explains Dr Carr. "But in dryland environments such as southern Africa this isn't possible. Fortunately it seems that hyrax urine preserves organic matter over timescales of tens of thousands of years, which provides remarkable insights into past environmental changes within the hyrax habitat."

Obtaining the material is not easy and Dr Chase is an experienced rock-climber, which allows him to reach middens that are often otherwise inaccessible. The middens form extremely tough deposits, which have to then be cut from the rocks with an angle grinder.

Using forensic techniques the Leicester group has been able to identify the individual organic molecules preserved in the middens; these include compounds produced by the hyraxes' metabolism and plant-derived molecules which passed through the animals' digestive system. These 'biomarkers' provide clues as to the kind of plants the animals were eating and therefore the sort of environment they were living in. The biomarkers thus reveal insights into how the climate of the region has changed during the last 30,000 years, with a potential accuracy of a few decades to centuries.

"Palaeoenvironmental records in this area were fragmentary," says Dr Carr. "The middens are providing unique terrestrial records to compare against nearby deep ocean-core records, allowing us to think in much more detail about what drives African climate change.

"This is a very dynamic environment, and it appears that that the region's climate changed in a complex manner during and after the last global Ice Age (around 20,000 years ago). The next step, which is part of Dr Chase's new research project, will be to compare the midden data against simulations of past climates generated by GCMs [computer-based general circulation models that are used to simulate both past and future climates] to evaluate their performance and explore why climates have changed the way they have."

Although the rock hyrax middens have been previously used to study pollen, this is the first time that their full potential to document the region's climate has been explored. Drs Chase, Carr, Boom and their colleagues have already a number of scientific papers on hyrax urine, with more in production.

• The research has been announced in the month when the University celebrates its Big Green Week (October 25-31) signalling the University's commitment to carbon reduction and highlighting research that has an environmental impact.

The Leverhulme Trust was established in 1925 under the Will of the first Viscount Leverhulme. It is one of the largest all-subject providers of research funding in the UK, distributing funds of some £50 million every year. For further information about the schemes that the Leverhulme Trust fund visit their website at www.leverhulme.ac.uk

The European Research Council (ERC) is the first European funding body set up to support investigator-driven frontier research. The scientists are encouraged to go beyond established frontiers of knowledge. ERC grants are awarded through open competition to projects headed by starting and established researchers, irrespective of their origins, who are working or moving to work in Europe - the sole criterion for selection is scientific excellence. http://erc.europa.eu/

Images available from pressoffice@le.ac.uk Images show Dr Brian Chase abseiling to sample a midden, and a hyrax basking in the sun 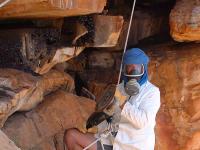