BLOOMINGTON, Ind. -- Complexity ever in the eye of its beholders, the animal with the most genes -- about 31,000 -- is the near-microscopic freshwater crustacean Daphnia pulex, or water flea. By comparison, humans have about 23,000 genes. Daphnia is the first crustacean to have its genome sequenced.

The findings are part of a comprehensive report in this week's Science by members of the Daphnia Genomics Consortium, an international network of scientists led by the Center for Genomics and Bioinformatics (CGB) at Indiana University Bloomington and the U.S. Department of Energy's Joint Genome Institute. A bullet-point list of the Science paper's most important findings appears at the end of this release.

"Daphnia's high gene number is largely because its genes are multiplying, by creating copies at a higher rate than other species," said project leader and CGB genomics director John Colbourne. "We estimate a rate that is three times greater than those of other invertebrates and 30 percent greater than that of humans."

Daphnia Genomics Consortium projects can be found at http://daphnia.cgb.indiana.edu, as well as a link to the nearly 40 companion papers based on the data reported in the Science paper.

Scientists have studied Daphnia for centuries because of its importance in aquatic food webs and for its transformational responses to environmental stress. Predators signal some of the animals to produce exaggerated spines, neck-teeth or helmets in self-defense. And like the virgin nymph of Greek mythology that shares its name, Daphnia thrives in the absence of males -- by clonal reproduction, until harsh environmental conditions favor the benefits of sex.

Daphnia's genome is no ordinary genome.

"More than one-third of Daphnia's genes are undocumented in any other organism -- in other words, they are completely new to science," says Don Gilbert, coauthor and Department of Biology scientist at IU Bloomington.

Sequenced genomes often contain some fraction of genes with unknown functions, even among the most well-studied genetic model species for biomedical research, such as the fruit fly Drosophila. By using microarrays (containing millions of DNA strands affixed to microscope slides) that are made to measure the conditions under which these new genes are transcribed into precursors for proteins, experiments that subjected Daphnia to environmental stressors point to these unknown genes having ecologically significant functions.

"If such large fractions of genomes evolved to cope with environmental challenges, information from traditional model species used only in laboratory studies may be insufficient to discover the roles for a considerable number of animal genes," Colbourne said.

Daphnia is emerging as a model organism for a new field of science -- Environmental Genomics -- that aims to better understand how the environment and genes interact. This includes a practical need to apply scientific developments from this field toward managing our water resources and protecting human health from chemical pollutants in the environment.

James E. Klaunig, professor and chair of the School of Health, Physical Education, and Recreation's Department of Environmental Health at IU Bloomington, predicts the present work will yield a more realistic and scientifically-based risk evaluation.

"Genome research on the responses of animals to stress has important implications for assessing environmental risks to humans," Klaunig said. "The Daphnia system is an exquisite aquatic sensor, a potential high-tech and modern version of the mineshaft canary. With knowledge of its genome, and using both field sampling and laboratory studies, the possible effects of environmental agents on cellular and molecular processes can be resolved and linked to similar processes in humans."

The scientists learned that of all sequenced invertebrate genomes so far, Daphnia shares the most genes with humans.

The idea behind environmental genomics for risk assessment is fairly simple. Daphnia's gene expression patterns change depending on its environment, and the patterns indicate what state its cells are in. A water flea bobbing in water containing a chemical pollutant will express by tuning-up or tuning-down a suite of genes differently than its clonal sisters accustomed to water without the pollutant. Importantly, the health effects of most industrially produced compounds at relevant concentrations and mixtures in the environment are unknown, because current testing procedures are too slow, too costly, and unable to indicate the causes for their effects on animals, including human. The new findings suggest that Daphnia's research tools (like microarrays) and genome information can provide a higher-throughput and information-rich method of measuring the condition of our water supply.

"Until now, Daphnia has primarily been used as sentinel species for monitoring the integrity of aquatic ecosystems," said Joseph Shaw, coauthor and IU School of Public and Environmental Affairs biologist. "But with many shared genes between Daphnia and humans, we will now also apply Daphnia as a surrogate model to address issues directly related to human health. This puts us in a position to begin integrating studies of environmental quality with research of human diseases."

A requisite for reaching model system status is a large research community that contributes to its growing body of knowledge and resources. Over the course of the project, the Daphnia Genomics Consortium has grown from a handful of founding members to more than 450 investigators distributed around the globe. Nearly 200 scientists have contributed published work resulting from the genome study, many in open-source journals published as a thematic series by BioMedCentral.

A list of these publications can be found at http://www.biomedcentral.com/series/Daphnia.

"Assembling so many experts around a shared research goal is no small feat," said Peter Cherbas, director of the CGB. "We're obviously proud of the CGB's catalytic role. The genome project signals the coming-of-age of Daphnia as a research tool for investigating the molecular underpinnings of key ecological and environmental problems."

Colbourne agreed, adding, "New model systems rarely arrive on the scene with such clear and important roles to play for advancing a new field of science."

The scientists present findings on the pace at which copied genes gain new functions, including a novel theory that accounts for the apparent rapid evolution of some of Daphnia's gene families (suites of related genes that result from repeated duplication events).

"Gene functions can become distinct very quickly," said Michael Pfrender, coauthor and associate professor of biology at the University of Notre Dame. "We had all assumed that newly copied genes that code for the same proteins would initially have the same functions, and that new functions evolve slowly with age, by acquiring rare beneficial mutations. Instead, we found that half of the newly copied genes had changed their expression very soon, possibly at the time of their origin."

Like in a mystery novel, the DNA evidence presented by examining the patterns of gene duplication in the study's first chapters was combined with clues of the genes' functions in later chapters to propose a new model for how genes accumulate in genomes.

"The smoking gun in this investigation was clear," said Kelley Thomas, coauthor and Hubbard Professor in Genomics at the University of New Hampshire. "A high rate of gene duplication, which produces a steady pool of new genes that have different expressions can facilitate the preservation of some gene-copies by natural selection."

Like most theories for how new genes evolve, their common fate is to wither by disabling mutations. For a new gene to persist, its function must give an advantage to the organism -- and the earlier the better for the gene to avoid bad mutations. In Daphnia's case, there seems to be a sufficiently large pool of young gene copies that some will be expressed in novel circumstances, and by chance be compatible with expression patterns of interacting genes required to perform its new function.

"At first glance, amplified gene families in Daphnia are more likely to be functionally related than not," said Michael Lynch, coauthor and distinguished professor of biology at IU Bloomington. "This suggests that gene functions via duplication often evolve in cooperation with other genes in the genome. We are not yet prepared to generalize our findings until we broaden our investigation to include more Daphnia lineages having different population histories. However, it's quite clear that this genome project opens up enormous opportunities that are not readily accomplished using other models with poorly understood -- and not terribly accessible -- ecologies."

So what other reasons might Daphnia have so many genes compared to other animals? The coauthors of the Science paper begin addressing that issue as well as others related to the genomic architecture and evolution of the species.

"We don't yet have final answers," Pfrender said. "The sequenced isolate did originate from a naturally inbred population, which may contribute to some features of this genome -- and Daphnia's partial asexuality may have a hand to play."

Another possibility, Colbourne said, is that "since the majority of duplicated and unknown genes are sensitive to environmental conditions, their accumulation in the genome could account for Daphnia's flexible responses to environmental change."

To speak with Project Leader John Colbourne and other IU Bloomington coauthors (see below), please contact David Bricker, University Communications, at 812-856-9035 or brickerd@indiana.edu.

Animal with the most genes? A tiny crustacean 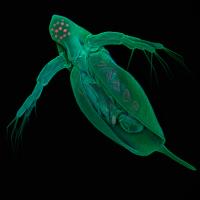