In 2006, Dr. McPherson was working with colleagues on a key to the nymphs of three midwestern species of assassin bug in the genus Sinea (i.e., S. complexa, S. diadema, and S. spinipes). To test their key for accuracy, they asked several others to check it by comparing it with insects in their collections or laboratories. All of them found the key to be satisfactory, except for one -- Dr. Scott Bundy from New Mexico State University, who found discrepancies in specimens that had been collected in New Mexico and identified as S. complexa.

"Jay asked me to review his key because he knew I had been rearing a species of Sinea in New Mexico," said Dr. Bundy. "When my bugs would not key out properly, I assumed there was just an error in the key. I then sent him some western specimens, and he saw that they actually were two different species."

As it turned out, Dr. Bundy's specimens were indeed Sinea complexa. However, the Midwestern species, which is very similar to S. complexa, was new to science but had remained undiscovered until now.

"I have named this species S. incognita to indicate that it has remained hidden for over 100 years as S. complexa, to which it is closely related," Dr. McPherson wrote.

Since its original description, scientists had believed S. complexa and S. incognita to be a single species that was found from California to Missouri and Illinois. This long-time hidden identity is responsible for the new bug's specific epithet.

The two species also are separated by geography as Sinea complexa occurs in the western and southwestern United States south into Mexico, whereas Sinea incognita occurs from Maryland south to Georgia and west to Kansas and Texas.

The new species -- Sinea incognita -- is described in the Annals of the Entomological Society of America in an article that also explains the differences between it and its close relatives, the aforementioned S. complexa and another called S. integra, which is found from Arizona and Texas south through Mexico to, at least, Guatemala and Honduras.

These and other differences are described in detail, along with photos of the species, in the Annals article.

The full article, "Sinea incognita McPherson, a New Species of Assassin Bug from America North of Mexico, with Designations of Lectotypes and Paralectotypes for Sinea complexa and Sinea integra and Analysis and Comparison of the Three Species (Hemiptera: Heteroptera: Reduviidae: Harpactorinae)," will be available online beginning Tuesday, December 23, 2014 at http://aesa.oxfordjournals.org/lookup/doi/10.1093/aesa/sau003

Annals of the ESA is pubished by the Entomological Society of America, the largest organization in the world serving the professional and scientific needs of entomologists and people in related disciplines. Founded in 1889, ESA today has nearly 7,000 members affiliated with educational institutions, health agencies, private industry, and government. Members are researchers, teachers, extension service personnel, administrators, marketing representatives, research technicians, consultants, students, and hobbyists. For more information, visit http://www.entsoc.org.

Annals of the Entomological Society of America

Newly discovered assassin bug was incognito, but now it's incognita

Journal
Annals of the Entomological Society of America 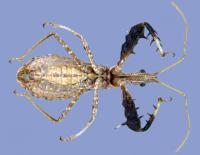