OAK BROOK, Ill. - Blood flow changes in the brains of children, adolescents and young adults with chronic kidney disease may explain why many face a higher risk of cognitive impairment, according to a study published online in the journal Radiology.

Prior research has linked chronic kidney disease, a condition characterized by the loss of kidney function over time, with lesions in the brain's signal-carrying white matter and deficits in cognitive performance. While chronic kidney disease in adults is frequently associated with age-related disorders such as hypertension and diabetes, the disease in childhood often occurs congenitally, yet still affects brain development and cognitive function.

"It's not clear if the brain problems from kidney disease seen in adults are secondary to the hypertension produced by the disease," said coauthor John A. Detre, M.D., professor of neurology and radiology, director of the Center for Functional Neuroimaging in Radiology and vice chair for research in neurology at the Perelman School of Medicine at the University of Pennsylvania in Philadelphia. "In our study, we wanted to look at patients with early kidney disease, before they've experienced decades of high blood pressure. In doing this, we could separate the kidney disease effects from those of chronic high blood pressure."

Patients with kidney disease showed higher cerebral blood flow compared with controls in certain brain regions -- a surprising finding, considering that decreased cognitive performance is generally associated with decreased blood flow in the brain, such as in aging and dementia. There are a couple of possible reasons for this unusual phenomenon, Dr. Detre said.

"It may indicate compensatory hyperactivity, in which the brain regions are working extra hard to maintain performance," he said. "Another possibility is that there's a disturbance in the regulation of blood flow in these patients."

White matter cerebral blood flow and blood pressure were also correlated, suggesting that kidney disease patients have problems with cerebrovascular autoregulation, the process that controls blood pressure in the brain. This type of dysfunction could potentially lead to white matter injury, according to Dr. Detre.

"Chronic kidney disease appears to affect brain physiology and function even early in the disease," he said. "This study gives us clues about what changes in brain physiology might underlie cognitive changes."

The findings point to cerebral blood flow measurements with arterial spin labeling as a potentially valuable tool in characterizing cerebrovascular function in chronic kidney disease -- an important area of research given the associations between kidney disease and neurological function, and the significantly increased risk for transient ischemic attack and stroke in even mild chronic kidney patients.

"Cerebral blood flow is a critically important physiological parameter that you can measure in just a few minutes with arterial spin labeling," Dr. Detre said. "This technique provides a noninvasive way of quantifying cerebral blood flow that doesn't require use of contrast agent, which is contraindicated in patients with kidney dysfunction."

This project is supported by a Commonwealth Universal Research Enhancement grant with the Pennsylvania Department of Health.

Radiology is edited by David A. Bluemke, M.D., Ph.D., University of Wisconsin School of Medicine and Public Health, Madison, Wis., and owned and published by the Radiological Society of North America, Inc. (http://RSNA.org/radiology) 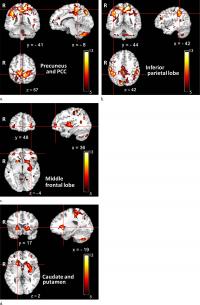