Living under a translucent rock can be quite comfortable -- if you're a moss in the Mojave Desert.

A graduate student at the University of California, Berkeley, found that some mosses in the California desert seek protection from the relentless sun and heat by sheltering under translucent quartz pebbles, essentially using the rocks as sunshades.

The soil under these rocks retains more moisture than exposed desert soil, said Jenna Ekwealor, while enough light leaks through the milky quartz to allow the tiny mosses to remain green with chlorophyll. Mosses actually prefer dim light, making these conditions ideal for growth. In contrast, nearby mosses in full sun are dried up and black.

One species of desert moss seems able to survive at high elevations only under the milky quartz, which occurs in outcroppings scattered around the desert. Mosses don't grow under granitic stones in the area because sunlight can't get through to the soil.

"We were there (in the Mojave) studying the population biology and reproductive biology of mosses, and picking up these cool quartz rocks, like, oh look at this pretty rock," said Ekwealor, an integrative biology doctoral student who works in the University and Jepson Herbaria at UC Berkeley. While all the other mosses were dry and dormant, she "saw that there was moss growing underneath the quartz and it was bright green. That was the first clue that something was different, that they were responding to the environment differently."

Working with her former master's thesis advisor, Kirsten Fisher of California State University, Los Angeles, they placed temperature and humidity sensors under milky quartz pebbles to record the microclimate from September of last year to February of 2020.

"The rock acts as a buffer for the extremes of the climate," Ekwealor said. "The desert is at a high elevation, it gets really hot in the summer and really cold in the winter. And days can be hot, and nights can be cold. The rock keeps the mosses underneath cooler during the hot parts of the year and warmer during the cold periods. The increased relative humidity was just a positive, an important thing for these plants that dry out when the relative humidity is too low."

Astrobiologists have long studied cyanobacteria that live under translucent desert rocks -- a possible model for the types of extreme life that could exist on other planets -- but this is the first green plant known to take advantage of these natural refuges.

"In the desert, for all organisms, it is like life or death all the time," she said. "So anytime you can find a little boost, a little benefit, it makes a really big difference."

Ekwealor and Fisher reported their discovery this week in the journal PLOS ONE.

As one of the first land plants to evolve more than 300 million years ago, mosses are well adapted to extreme environments, able to survive repeated desiccation and freezing. Some produce sunscreens to protect against intense ultraviolet sunlight. Some can remain essentially dead, with zero metabolic activity, for a decade, and then revive in seconds when wetted. They're found in the Arctic and Antarctic as well as the hottest, driest deserts.

One of the moss species that often lives under milky quartz, Syntrichia caninervis, typically grows on exposed soil in biocrusts, an association with lichens and cyanobacteria. These crusts are a feature of many deserts, protecting the soil from erosion and providing nutrients for other plants.

As part of the desert's biological crust, Syntrichia are inconspicuous -- about 1 millimeter in diameter and 5 millimeters long. They grow only when wet, and since the Mojave may get only five "precipitation events" per year -- half of which could be snow, which is not conducive to growth -- they grow slowly. Ekwealor estimates that Syntrichia grows only a couple of millimeters per year.

The rest of the time, the Syntrichia mosses on exposed soil remain dormant, turning a dark brown-black, possibly as a sunscreen -- something Ekwealor is trying to figure out for her Ph.D. thesis.

She found that, in contrast to the exposed mosses, mosses that crawl under a rock grow about 60% faster.

"The mosses that normally live at that elevation are small and brown on the soil surface, and under the rocks they are tall and green," she said.

At its lowest, the average relative humidity under the rocks was about twice that of exposed soil -- 63% versus 33%. The daily temperature swing in the "hypolithic microenvironment" was reduced by about 4 degrees Celsius (7 degrees Fahrenheit) from that on the soil surface.

A second moss species, Tortula inermis, grows commonly in full sun at lower altitudes, but at the elevation of the study site, 1,900 meters (6,200 feet), it appears to grow only under milky quartz.

"The rocks offer mosses two big benefits: either a boost in their normal habitat, or they get to live in a habitat that you wouldn't normally live in," Ekwealor said.

Though mosses prefer dim, moist conditions, they, like all plants, require some light or they turn white and die. According to her measurements, between 4% and 0.4% of incident light is transmitted through milky quartz rocks, depending on the size of the rock. At her study site, in a place called Sheep Creek Wash, the quartz ranged in thickness from 25 to 14 millimeters, or an inch to two-fifths of an inch.

The researchers suspect that the quartz not only reduces the overall light and heat, but also provides protection from damaging UV rays. Mosses growing under quartz had less pigmented sunscreen than those growing in exposed areas.

A self-described "moss evangelist," Ekwealor is fascinated by the tiny world of mosses, and occasionally leads local moss walks for the bryophyte chapter of the California Native Plant Society.

"For these tiny plants, a thing like this giant quartz rock over you blocking out all the sun and keeping you wet -- it is like a huge habitat," she said. "You can be in the middle of the desert, but a small rock makes you feel like you are in a spring. We have to remember to see the world from the perspective of a very small plant." 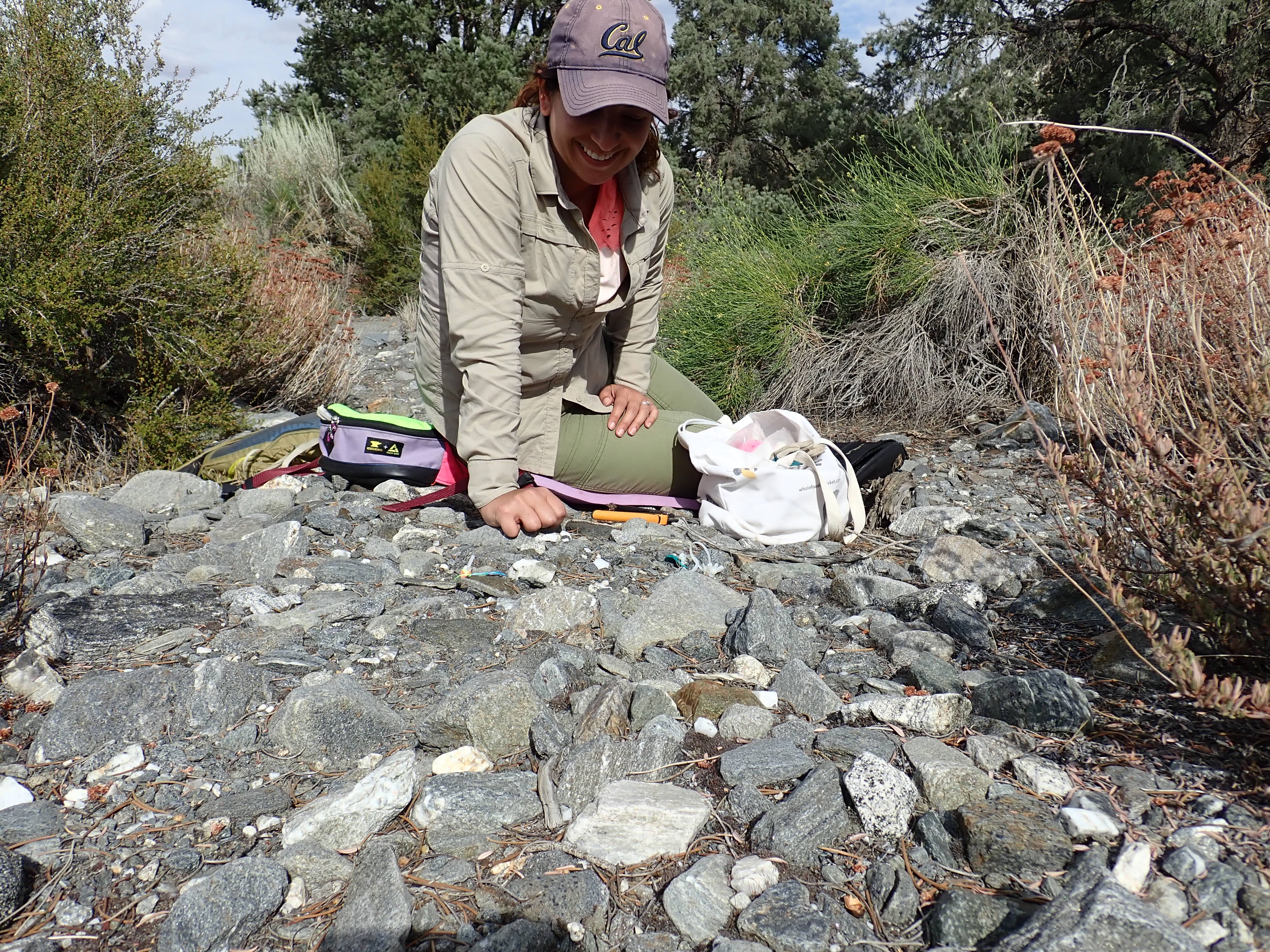 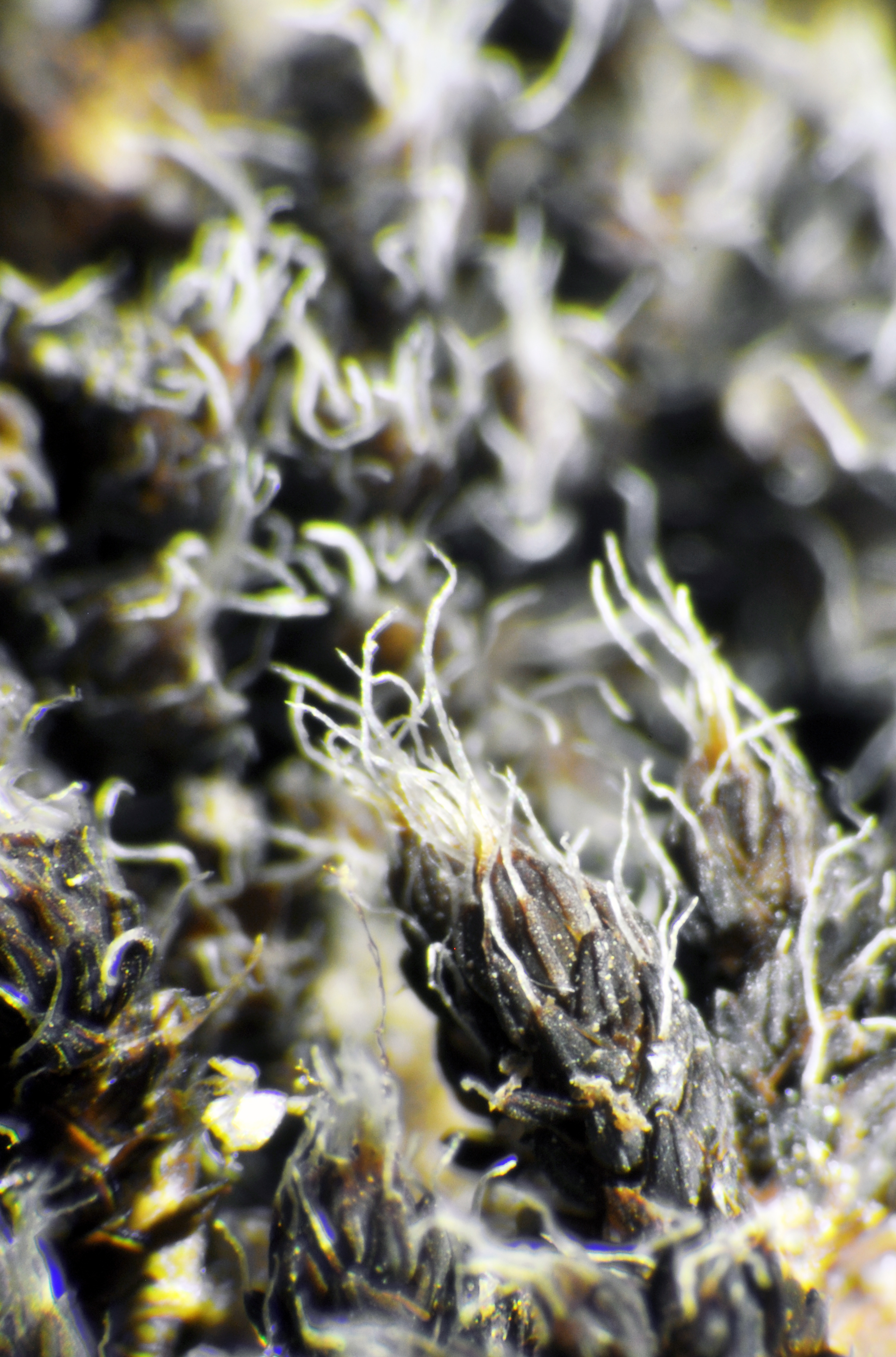 Desiccated Moss in the Mojave