A study led by research groups of Prof. FU Qiaomei from the Institute of Vertebrate Paleontology and Paleoanthropology (IVPP) of the Chinese Academy of Sciences and Prof. ZHANG Hucai from Yunnan University covers the largest temporal transect of population dynamics in East Asia so far and offers a clearer picture of the deep population history of northern East Asia.

The study was published in Cell on May 27.

To answer questions related to the deep population history of East Asia, the researchers obtained genome-wide genotype data from 25 ancient humans ranging from 33 to 3.4 ka from the Songnen Plain (Heilongjiang Province, northeastern China) in the Amur Region. This period covers the Last Glacial Maximum (LGM), which is crucial to understanding what happened to northern East Asians before, during and after the LGM.

They found that the oldest sample (AR33K, ~33 ka) shares the highest genetic affinity with the Tianyuan man (~40 ka near Beijing, which represents the earliest ancient genome found in East Asia so far), compared to all other published ancient and modern individuals. This probably indicates that Tianyuan/AR33K ancestry was widespread before the LGM in northern East Asia, both geographically and temporally (from 40 ka to 33 ka). In addition, both AR33K and Tianyuan are basal to all East Asians."

The second oldest sample (AR19K, ~19 ka), an individual who lived toward the end of the LGM, is revealed to be the earliest northern East Asian yet identified. This shows that North-South genetic separation in East Asia occurred as early as 19 ka, 10,000 years earlier than previously discovered. AR19K also possesses a genetic ancestry distinct from that of the modern humans who occupied this region before the LGM (e.g., Tianyuan and AR33K), indicating a potential population shift.

The analyses of younger samples after the LGM demonstrate that the genetic continuity reported between modern inhabitants of the Amur Region and the Devil's Cave population (about 8 ka) probably started as early as 14 ka, i.e., 6,000 years earlier than previously proposed.

Besides elucidating population dynamics, these analyses provide the first ancient DNA evidence to narrow the time of appearance of an Asian-specific variant (EDAR V370A), which is associated with anthropogenic traits like thicker hair shafts, more sweat glands, and shovel-shaped incisors.

"This genetic variant was likely to be elevated to high frequency after the LGM. Our direct observations using ancient DNA likely support the hypothesis that selection on EDAR V370A increased vitamin D in breast milk in a low UV environment," said Associate Professor MAO Xiaowei, the first author of the study. 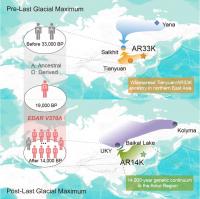