Red jasper cored from layers 3.46 billion years old suggests that not only did the oceans contain abundant oxygen then, but that the atmosphere was as oxygen rich as it is today, according to geologists.

This jasper or hematite-rich chert formed in ways similar to the way this rock forms around hydrothermal vents in the deep oceans today.

"Many people have assumed that the hematite in ancient rocks formed by the oxidation of siderite in the modern atmosphere," said Hiroshi Ohmoto, professor of geochemistry, Penn State. "That is why we wanted to drill deeper, below the water table and recover unweathered rocks."

The researchers drilled diagonally into the base of a hill in the Pilbara Craton in northwest Western Australia to obtain samples of jasper that could not have been exposed to the atmosphere or water. These jaspers could be dated to 3.46 billion years ago.

"Everyone agrees that this jasper is 3.46 billion years old," said Ohmoto. "If hematite were formed by the oxidation of siderite at any time, the hematite would be found on the outside of the siderite, but it is found inside," he reported in a recent issue of Nature Geoscience.

The next step was to determine if the hematite formed near the water's surface or in the depths. Iron compounds exposed to ultra violet light can form ferric hydroxide, which can sink to the bottom as tiny particles and then converted to hematite at temperatures of at least 140 degrees Fahrenheit.

"There are a number of cases around the world where hematite is formed in this way," says Ohmoto. "So just because there is hematite, there is not necessarily oxygen in the water or the atmosphere."

"We found that the hematite from this core was made of a single crystal and therefore was not hematite made by ultra violet radiation," said Ohmoto.

This could only happen if the deep ocean contained oxygen and the iron rich fluids came into contact at high temperatures. Ohmoto and his team believe that this specific layer of hematite formed when a plume of heated water, like those found today at hydrothermal vents, converted the iron compounds into hematite using oxygen dissolved in the deep ocean water.

In fact, the researchers suggest that to have sufficient oxygen at depth, there had to be as much oxygen in the atmosphere 3.46 billion years ago as there is in today's atmosphere. To have this amount of oxygen, the Earth must have had oxygen producing organisms like cyanobacteria actively producing it, placing these organisms much earlier in Earth's history than previously thought.

Ohmoto suggests that this approach eliminates the problems trying to decide if carbon residues found in sediments were biologically created or simply chemical artifacts. 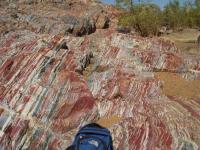