A team from Wits University's Evolutionary Studies Institute has discovered a fossil monkey specimen representing the earliest baboon ever found.

"Baboons are known to have co-existed with hominins at several fossil localities in East Africa and South Africa and they are sometimes even used as comparative models in human evolution," says Dr Christopher Gilbert (Hunter College, CUNY), lead author of the study.

The skull, found during excavations for A. sediba, confirms earlier suggestions that the fossil baboon species to which it belongs, Papio angusticeps, was in fact closely related to modern baboons, and quite possibly the earliest known members of the modern baboon species Papio hamadryas.

Modern baboons (genus Papio) are typically divided into a number of populations recognised as either species or subspecies spread all throughout sub-Saharan Africa and into the Arabian Peninsula. Despite their evolutionary success, modern baboon origins in the fossil record have not well-understood or agreed upon.

"According to molecular clock studies, baboons are estimated to have diverged from their closest relatives by ~1.8 to 2.2 million years ago; however, until now, most fossil specimens known within this time range have been either too fragmentary to be definitive or too primitive to be confirmed as members of the living species Papio hamadryas," says Gilbert.

"The specimen from Malapa and our current analyses help to confirm the suggestion of previous researchers that P. angusticeps may, in fact, be an early population of P. hamadryas."

Analyses of the specimen at Malapa, and the group of fossil specimens traditionally placed in the fossil species P. angusticeps, suggest that P. angusticeps displays anatomy that is consistent with modern baboon populations.

"If you placed a number of P. angusticeps specimens into a modern osteology collection, I don't think you'd be able pick them out as any different from those of modern baboons from East and South Africa," says Gilbert.

Furthermore, the estimated age of the specimen from Malapa, ~2.026-2.36 Ma, is in almost perfect agreement with molecular clock analyses for the initial appearance of modern baboons. Thus, the specimen at Malapa may help to solve the evolutionary origins of these highly successful animals and confirm the estimates of molecular studies. In addition, because monkeys are widely recognised as key time-sensitive elements in the fossil record, the fact that the Malapa P. angusticeps specimen is well-dated allows future studies to better estimate the age of fossil sites where the species is found. South African early hominin sites, in particular, may be able to achieve more accurate age estimates on the basis of these new findings.

This study is published in an article titled: Papio Cranium from the Hominin-Bearing Site of Malapa: Implications for the Evolution of Modern Baboon Cranial Morphology and South African Plio-Pleistocene Biochronology in the journal, PLOS ONE, on 19 August 2015. The study is authored by USA researcher Dr Christopher Gilbert, and his co-authors from the Evolutionary Studies Institute at the University of the Witwatersrand, Dr Christine Steininger, Dr Job Kibii and Professor Lee Berger.

Dr Christopher C. Gilbert is Associate Professor in the Anthropology Department at Hunter College of the City University of New York. His research focuses broadly on primate evolutionary history and biogeography, and he is the author of over 30 scholarly articles on cercopithecoid monkeys and other primates. His paleontological and behavioural fieldwork includes experience in North America, Africa and Asia and spans the last 60 million years of primate and mammalian evolution. He is a recent recipient of the Wenner-Gren Hunt Fellowship and he is currently collaborating on an edited volume investigating the systematics, evolution and biochronology of African Plio-Pleistocene monkeys.

Dr Christine Steininger is Projects Manager of the Evolutionary Studies Institute, University of the Witwatersrand, and Centre of Excellence in Palaeosciences in South Africa. She received her BA at Northern Illinois University, and her MSc (with distinction) and PhD at the University of the Witwatersrand. Her research interest includes the use of stable light isotope and microwear techniques to understand the dietary behaviours and landscape usage of mammals including hominins. She is the permit holder of Cooper's Cave and co-permit holder of Gondolin hominin fossil sites in the Cradle of Humankind.

Professor Lee R Berger is Head of Division in Palaeo-anthropology at the Evolutionary Studies Institute, University of the Witwatersrand, and an Explorer in Residence at the National Geographic Society. His explorations into human origins on the African continent, Asia and Micronesia for the past two and a half decades have resulted in many new discoveries, including the most complete early hominin fossils ever discovered that belong to a new species of early human ancestor -Australopithecus sediba from Malapa. He is Director of one of the largest palaeontological projects, leading investigations of the Malapa site in South Africa as well as leading the Rising Star Expedition in 2013 resulting in the discovery of the largest primitive hominin assemblage in history. 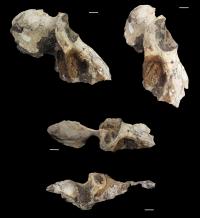