Scientists from the University of Massachusetts Amherst, Vanderbilt University and Clark University have shed new light on the genomic foundation of the polar bear's ecological adaption by pinpointing rapid changes in the bear's gene copy numbers in response to a diet shifting from vegetation to meat.

In a paper published Monday, June 17 in the Proceedings of the National Academy of Sciences and chosen for the cover of PNAS Vol. 116, issue 27, John G. Gibbons and Ph.D. student Shu Zhao of UMass Amherst, David C. Rinker of Vanderbilt and Natalya K. Specian of Clark discuss the first population-level study to characterize genome-wide patterns of copy number variation (CNV) in the polar bear and brown bear.

CNV refers to differences among individuals in the number of copies of a particular portion of the genome, and the study's results suggest this variation played an important role in the adaptation of polar bears to the Arctic.

"This research addresses a big-picture evolutionary question of how diet shapes the genome," explains Gibbons, assistant professor of food science.

Since the brown or grizzly bear (Ursus arctos) and polar bear (Ursus maritimus) diverged less than 500,000 years ago, the polar bear has evolved unique traits to adapt to the Arctic climate and ecology, such as a camouflaging coat of pigment-free fur. Previous population genomic studies of polar bears and brown bears analyzed single-nucleotide polymorphisms, or changes in a single base pair in a DNA sequence.

"CNVs were traditionally harder to detect so they weren't always analyzed," Gibbons says. "With recent advances in DNA sequencing technologies over the last 15 years or so, computational approaches to detect and quantify CNVs from genomic data have been developed. The polar bear data gave us a nice opportunity to fill in the gap."

Using available raw whole-genome DNA sequence data, the team of researchers compared differences in gene copy numbers among 17 polar bears, nine brown bears and two black bears. "Polar bears and brown bears are excellent models for exploring the impact of natural selection on CNV," the researchers write, "because they inhabit vastly different habitats yet are so recently diverged that they remain capable of producing fertile hybrid."

Gibbons says he and his colleagues hoped to see differences in gene copy numbers related to the bears' diet, and they did. Brown bears are omnivores, primarily consuming vegetation, while polar bears evolved quickly to a fully carnivorous diet, eating seals and other animals.

"This was a test case in understanding the effect of differences in diet on copy number variations," Gibbons says. "If we didn't see it here, we might not see it anywhere. It was pretty widespread and pretty convincing."

Gibbons points to two of the interesting findings. Of the genes annotated as olfactory receptors, 88 percent had lower copy numbers in polar bears, compared with brown bears and black bears. He explains, "First, there is less to smell in the Arctic. The polar bears mainly have to hone in on two things - seals and mates. They aren't looking for berries, grasses, herbs, roots and bulbs, like the brown bear."

Polar bears also were found to possess fewer copies of the gene AMY1B than brown bears. AMY1B encodes salivary amylase, the enzyme that jump-starts the digestion of starch when animals chew plant-based food. "Human populations with a high-starch diet have more copies of this gene in their genome than human populations with a lower-starch diet," Gibbons says. "We found the same thing with bears. If you think about their diets, it makes sense."

"Evolution acts on different types of genetic variants to do the same thing," Gibbons says. "Now that we have the technology to detect CNVs, the consensus is that this type of mutation should be examined, along with the traditional methods for detecting parts of the genome that are shaped by natural selection."

Gibbons plans to build on the polar bear genomic research with an investigation of another species: Homo sapiens. "Our next step is to look at two different human populations to see if we see similar differences in copy number variants." 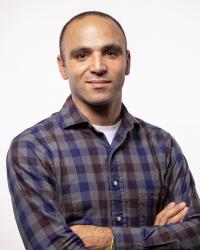